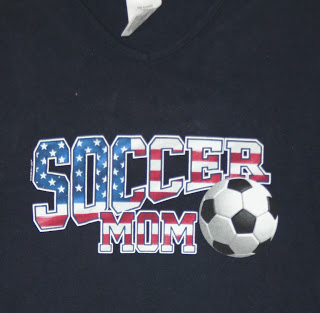 Once upon a time, there was a little blonde girl who journeyed into a brand new place: Soccerland. When she donned her cleats, shinguards, and red and white jersey, she magically transformed into a Ladybug. And what a Ladybug she was! She could kick her strong ladybug legs and she could spread her wings to fly across the field. Her Ladybug coach was a nice man, but at the end of the season, he had to move away. And some of the moms (not this one) couldn't figure out how to play nicely. So all of the little Ladybugs had to fly away home.

The next year, our Ladybug traded her red jersey for a purple one. This time when she put on the cleats and shinguards, she was a Cheetah Girl. No longer just an insect, now she was a Disney Channel character! She and the other Cheetah Girls were the "fast cats," and they all transformed into one big purple blur when each game began. These purple Cheetahs had an amazing coach who was so encouraging and gentle with them. And even the grown-ups seemed to get along! All was well within Soccerland.

But our Cheetah Girl was not content with the white ball that ruled that land. She was entranced with another ball, an orange one that bounced high. She longed to use her hands to shoot that ball, to hear the SWISH of it through a net. The soccer season ended and we said our goodbyes to the other Cheetah Girls. Our Cheetah was moving on -- onward and Upward to basketball.

We sometimes recall our days in Soccerland. In spite of our bleacher time in the blazing heat or freezing wind, we have mostly fond memories of those Saturdays at Green Valley. Our Ladybug/Cheetah Girl had much fun, scoring goals or blocking them. But when we're inside the cozy RHCC gym on an icy winter afternoon, we're thinking Basketball Land's not so bad after all.

And the little blonde girl? She played happily ever after.
Posted by See-Dub at 6:48 AM

So do you still get to wear your "Soccer Mom" shirt even thought your technically not? I hate to see a good shirt go to waste. lol

I was going to email you the Bunco info but then I realized that I don't have your email. Do you mind emailing me at adoptionanswers@verizon.net so that I can send you the info? Thanks!