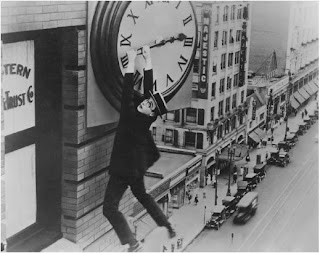 I'm stealing a page from Brett's blog to mention the gems he's found at our local library. So far he's checked out three sets of Harold Lloyd DVDs, and we've all had so much fun watching them!

Harold Lloyd's image, especially the one above, is probably more recognizable than his name, which is a shame since his silent movies are laugh-out-loud funny. His physical comedy, combined with his daredevil stunts, have led to many "Rewind! Rewind!" cries from the kids. Besides the famous clock-dangling scene from "Safety Last," we've seen him almost fall off countless ledges and watched him balance precariously on skyscraper beams. We've also howled at all kinds of little moments, like the jigging grandma or a hair-raising surprise. The last few times we've all crammed ourselves on the couch to watch "just one," we've ended up watching three or four of the short films from the DVD.

While looking for a Harold Lloyd image, I found out that he lost his right thumb and forefinger in an on-set accident while filming "Haunted Spooks" in 1919. That's really amazing because most of his films that we've seen were filmed AFTER that accident. That means he performed all of those crazy stunts while wearing a prosthesis covered by a glove. Unbelievable!

So Harold Lloyd? The Dubs give him thumbs up—especially now that we know he was missing one!
Posted by See-Dub at 11:01 AM

KB and I love watching those old silent films. Especially the comical ones. I will have to add some Harold Lloyd films to my Netflix. We are always looking for good clean comic relief for the kids and us. Thanks!