Proud to be an American, part 2. 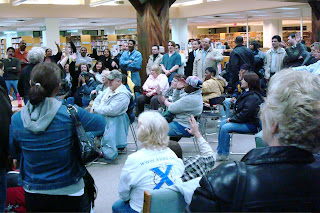 Tuesday night I joined hundreds of my neighbors at our precinct convention. Our local library actually hosted five conventions in one place, which means there were long lines and much chaos as everyone had to wait
(a) for the long line of voters to finish placing their ballots (which went way past 7 p.m.),
(b) to verify that people had voted if they didn't have stamped registration cards,
(c) to be sent to their precinct's gathering,
(d) to sign in, and
(e) for everyone who had been waiting outside the library to make their way inside.

In many ways the caucus was an exercise in frustration, but it was phenomenal to see so many people wanting to take part in the democratic process. I also enjoyed getting to know so many of my neighbors! I met a woman who was in Dallas the day Kennedy was killed. (She still remembers looking up just as Air Force One was heading home with the president's body.) I talked with an aeronautic consultant. He said English teachers are needed to train air traffic controllers to speak the universal language in the control tower. (He said he might have a job for me if I ever leave teaching!) There was the lady with a walker who is recovering from double knee-replacement surgery. (She can barely walk right now, but she waited—standing, mostly—in the 40-degree weather for two hours because it was just that important to her to cast her vote.)

It was exhausting, but it was exciting, too. I'm glad I got to attend—and I'm glad that night was snow-free!
Posted by See-Dub at 11:24 PM

Email ThisBlogThis!Share to TwitterShare to FacebookShare to Pinterest
Labels: patriotism