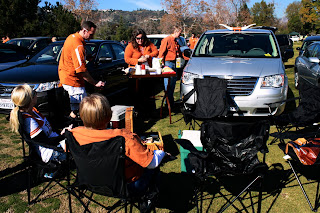 We parked on the golf course and set up our scaled-down tailgate. 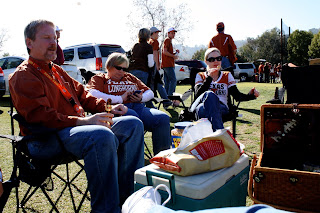 Would you believe we were HOT? While everyone back home was dealing with temps in the teens, we were wishing we had sunscreen! 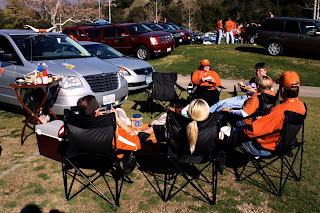 It was great to be set up and out of traffic hours before kickoff. 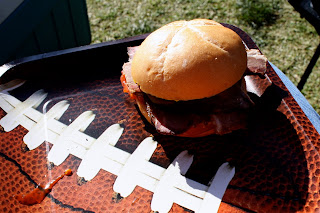 Leftover Salt Lick made for some tasty sandwiches, too. 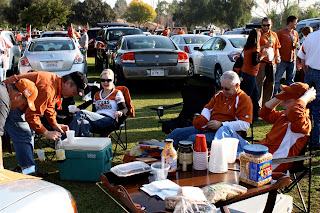 Eventually we were joined by some of our LX regulars: Coach, Jan, Dan and Mitzi. 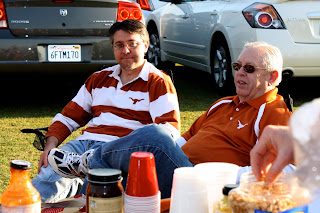 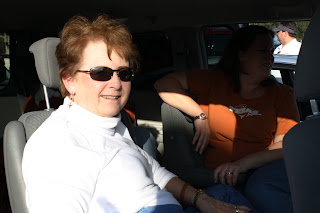 At one point the sun got to us, and several of us took refuge in the shady van.

Some Amarillo friends were there, too: 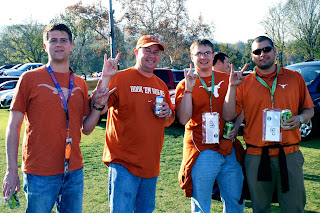 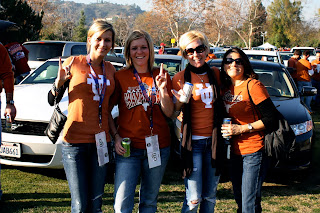 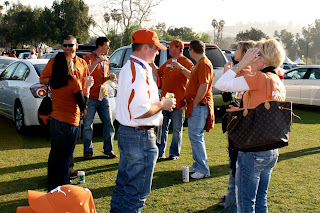 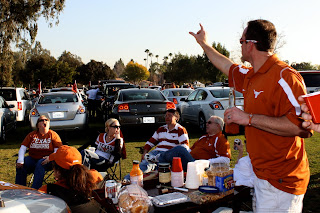 Maybe we were there just a little too long, or perhaps the prolonged sun exposure made us crazy? T ended up throwing peanuts for Dede to catch.

In any case, we headed to the stadium, ready for the big game! 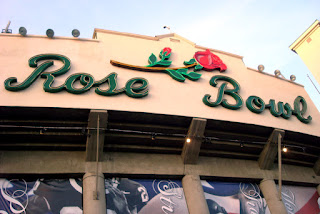 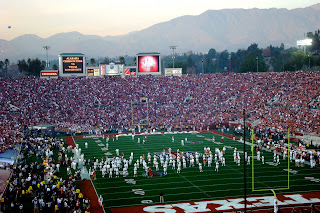 It's a scenic place to see a game, that's for sure. But can we be honest? The old Rose Bowl is a PAIN for fans! The entrance tunnels for each section are notorious for traffic jams, and since no food or drink is sold in the stands, a snack run takes at least 25 minutes. Same goes for potty breaks. Better go before you find your seat, or you're guaranteed to miss the better part of a quarter! 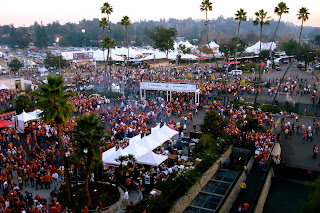 Our seats were on row 76 (out of 77). Dede doesn't care for heights, but I enjoyed peering over the edge of the stadium to see the masses below. 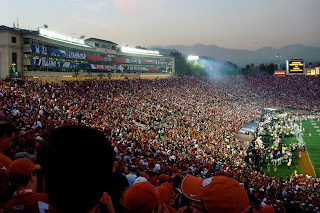 It was strange to be on the opposite side of the stadium this time around. Four years ago, for the game that I've relived in my dreams countless times, Texas had the other endzone. 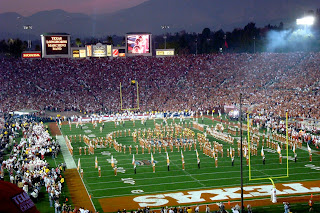 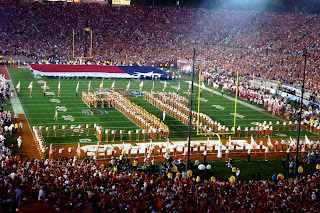 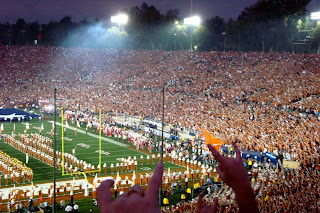 The Eyes of Texas 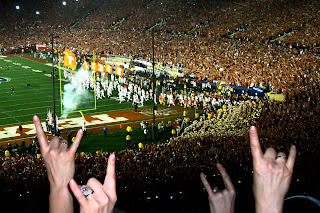 Every fan should get to attend a big game like this at least once! The spectacle of it all is something else. Audra McDonald sang "America the Beautiful" as paratroopers landed in the stadium, 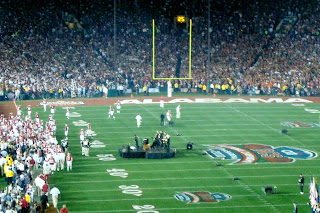 and then Josh Groban sang the national anthem (accompanied by Flea from Red Hot Chili Peppers). 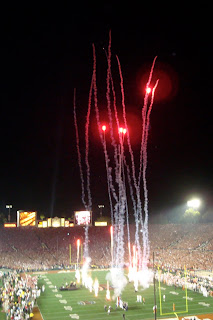 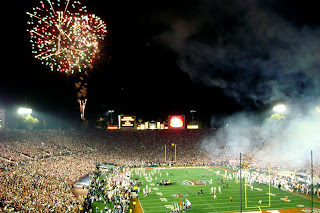 We got to see fireworks and a flyover: impressive!

And then the game started. Oh, the game.

It hasn't been quite a week since the game, and I'm still having a hard time talking about what happened. After a huge defensive stand followed by a quick march down into Bama territory, I saw Colt scramble and get hit. I also saw him quite suddenly run off the field. Before those events could even register, I also saw Gilbert throw on his helmet and run into the game. It struck me as odd that we didn't call a timeout, but because it all happened so quickly, I was just sure Colt would be back in the game in a play or two.

But he didn't come back. In the uppermost corner of the stadium, we were in the dark, literally and figuratively. With each possession that Gilbert played, we knew Colt's injury had to be more severe than we'd first thought. Everyone around us was texting, trying to find out what had happened. Because there were almost 100,000 cell phone users there, it was next to impossible to get a signal.

And then the texts started coming through. Shoulder injury. Re-evaluate at halftime. Done for the night.

I didn't take many pictures during the game, mostly because it didn't feel much like a real game. It didn't feel "real" at all. How could it? How could this be happening? Colt McCoy, our starting quarterback, was on the sideline. Colt, a young man who had won more games than anyone as a Division 1 quarterback, but who had impressed me more with his maturity and spirituality. Colt, who had worked so hard to get this team to this national stage. How could this happen to him? 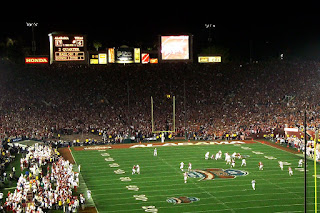 And Garrett Gilbert? This guy had taken what, 23 snaps during games in his young college career? I felt so bad for him, having to take over in this toughest of circumstances. Yes, he turned the ball over, but my goodness, he played an amazing game! Once he started connecting, the guy was on FIRE! Gilbert's a stud, and he and our defense just almost brought this team all the way back. At one point, we were down by 11, a predicament that reminded me more than a little of the '06 championship game. 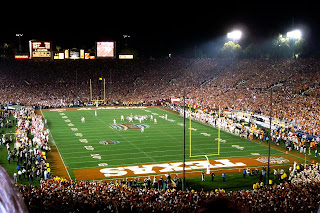 And then we were down by 3. Three points! The defense held, we got the ball, and we had 3 minutes to score (at least) 3 points to complete the miracle comeback.

But then Garrett was sacked. The ol' blind side. Bama ball.

Several had complained about Texas fans moaning, "If only Colt..." But really, can you look at this game that was decided by turnovers (caused by an inexperienced QB) and honestly think Bama would've stood a chance against a Colt-led team? Some have compared that to saying, "If we only had Terry Bradshaw, Jerry Rice, etc." That's not accurate at all. Can you think of another major championship game when a team lost its starting QB so early in the game? Not that it matters. Alabama won. 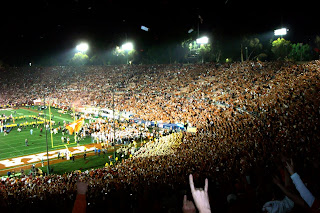 But after the crimson and white confetti showered us all, we Texas fans held our heads and Horns high as we sang the final "Eyes." This team had played poorly at points during the season, the last two games in particular. But on this night when no one picked them to win, they played their hearts out and came THIS CLOSE to pulling off a win that at halftime seemed out of reach. They had fought back when it seemed hopeless. They had shown character when their backs were against the wall.

And after the game, a heartbroken Colt showed us what he's made of:

In the end, I can't say anything other that what I tweeted that night: "SO PROUD OF MY HORNS."
Posted by See-Dub at 4:30 PM