Game 9: Yet another nail-biter. 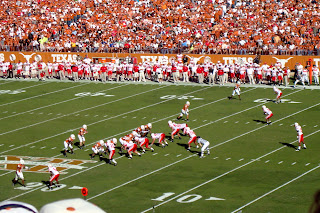 It was another close one for our guys! Nebraska's having an AWFUL season, but we managed to make them look good. 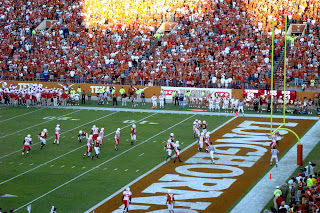 (If you look inside the first O in Longhorns, you can see the ball on its way into the Cornhusker's hands for a successful 2-point conversion. This brought the Huskers to within 3 points of the Horns.)

As was the case in the K-State game, Colt was under attack all day. The Nebraska defense just hammered him, and he had very little time to get rid of the ball. On one play, a late hit knocked him out of the game. Chiles came in and ran a zone-read that ended up with Jamaal Charles gaining 25 yards. Our rubber-made QB McCoy returned to the game the next play and ZOOOOM! Even though little cartoon birdies were circling his dazed head just minutes earlier, Colt ran for 24 yards. Then JC finished the drive with another long run for a touchdown, and we were back in business. Two more long runs for TDs sealed the deal. Whew. 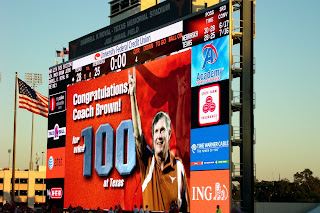