There's nothing like the Texas-OU game in all of college sports! The 50-50 split, both schools' traditions, the midway rides towering over the stadium, the passion of fans fueled by Fletcher's corny dogs... 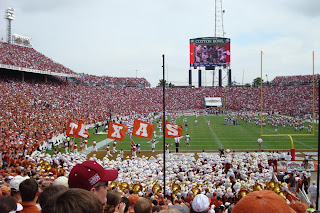 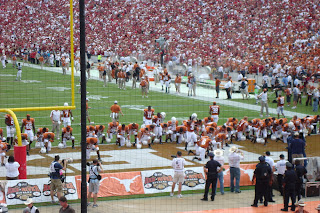 Even Ross the Intern (from the Tonight Show--he's in the combo jersey below) knows that this game is the place to be! (His segment on the game is supposed to air Thursday, Oct. 11.) 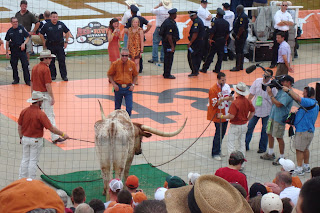 The LHB brought their A game: 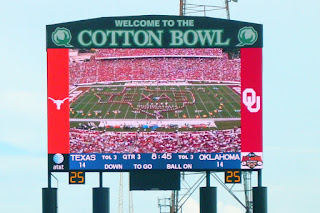 And the boys in burnt orange stepped up their play, a huge improvement over last week: 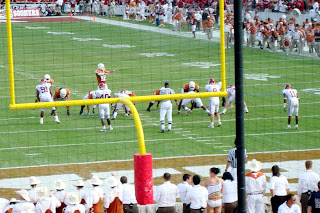 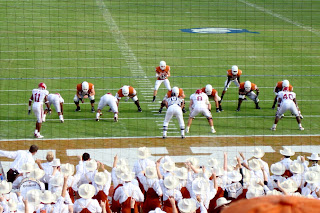 But I have to confess: Coming into this weekend, I just knew we were going to lose. My boys looked awful against K State, and in spite of OU's loss to Colorado, the Sooners just looked too strong to lose this edition of the Red River Rivalry. Then my Horns showed up! They looked much better this week, even taking the lead at one point, giving us hope that yes, we could win this one!

But then the pigskin flew out of Jamaal's hands and into the Land Thieves'. 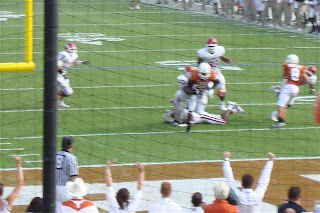 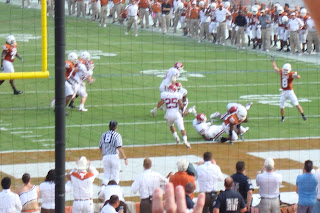 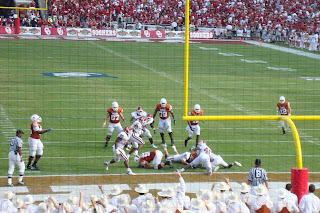 That fumble (I think it's the last picture) inside the 5, along with another tipped pass-turned-INT, meant we would remain winless in Big XII play. But oh, we were so close! Of course, I hate losing to OU, but my Horns played much better than I expected. I never should've doubted them!

So they're off to Ames for what SHOULD be our first conference win since early November 2006. I will not doubt; I have faith in my Horns! Hook 'em!
Posted by See-Dub at 10:52 PM