Because our Friday nights are spent watching Ryan's high school's games, it's rare that I get to see my students hit the field. However, this particular game against our big (and I mean that literally) cross-town rival was on a Thursday night. 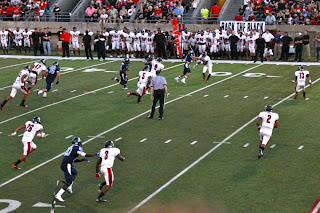 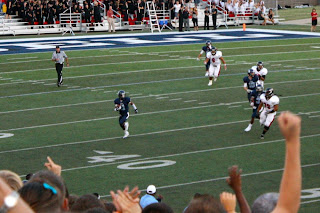 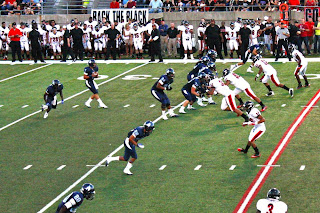 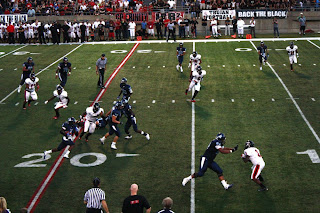 And what a game it turned out to be! Our team jumped out to a 3-0 lead late in the first quarter. This is remarkable because we haven't beaten the Trojans in 14 years. FOURTEEN! It was so exciting to just have a lead over these guys that I took a picture of the scoreboard: 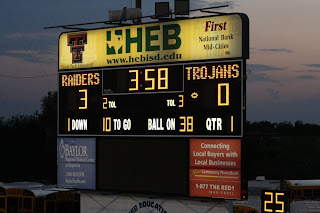 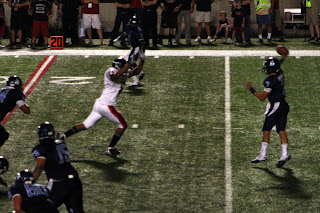 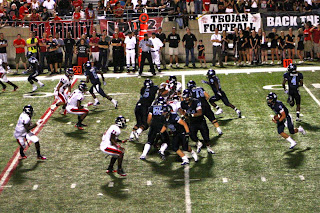 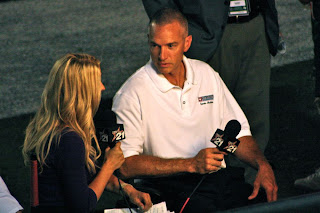 Going into halftime, our side of the stadium was all atwitter. The game was being televised locally, so we knew we had a pretty big audience for this possibly streak-busting game. Facebook messages and texts were flying around: Could this be the year? 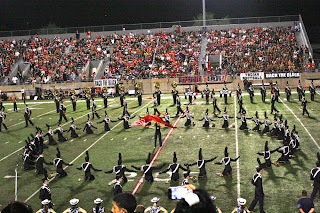 And of course, our band "won halftime." 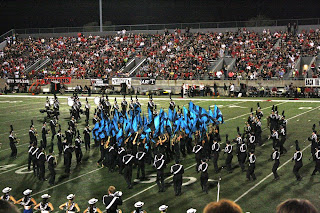 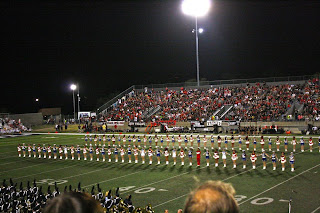 The two schools' drill teams did their traditional friendship dance, too. 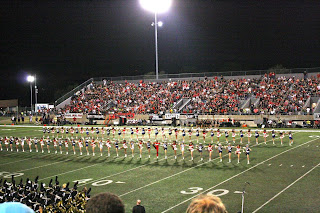 All was kicking and clicking along quite nicely until lightning showed up in the vicinity. While the teams were still in the locker room, everyone was ordered to vacate the stands.

Katie and I waited as long as we could, but once the weather let up enough for us to get back to our car safely, we headed out.

I was disappointed to have to leave the game, but with the crazy weather and Katie's homework, we knew it was the right thing to do. I took a photo of the rain on the windshield to symbolize this wash-out of a game: 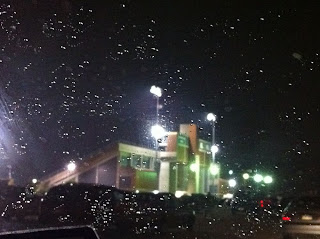 It was right about that time when we were just surrounded by lightning. Katie and I, both armed with our cell phone cameras, decided to have a little contest to see who could get the best lightning shot. We got our phones ready, steadied our hands on the dash and waited.

All of 30 seconds later, we saw a big flash. We both looked at our phones, and I immediately started screaming. 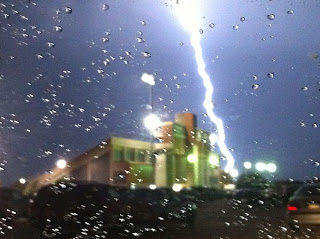 Looks Photoshopped, but it's the Real McCoy. Crazy. Katie and I howled at our good luck (because this photo was complete luck--no skill involved), and it took quite a while for me to settle down enough to even drive home.

(And no, I have no idea why I kept saying Katie's first and last names in exclamation.)

That photo ended up flying around the Twitterverse, by the way.

Postscript: The second half began around 10:30 that night, long after we'd gone home. I watched the rest on TV, but there wasn't much to see. We thought lightning could strike and we'd beat our heavily favored rivals, but when lightning really struck, the momentum seemed to shift to the other team. We lost, 41-11.

That loss, while disappointing, was nothing compared to the real tragedy of that evening. A friend and colleague of mine, one of the two teachers Katie and I sat with at the game, was in an awful hit-and-run motorcycle accident as she was leaving the parking lot. Her injuries, while not life-threatening, required surgery, and the road to her recovery will be a long one. As I write this in November, she's still rehabbing from her injuries. Our prayers for her complete healing continue.