It wasn't pretty, but we won. We were favored by bunches but won by just 8 points. Scary! But as Darrell Royal once said, "Ol' ugly is better than ol' nothin'."

For us, the game got off to a bad start because we had such a hard time getting to our seats! Because of construction in the north endzone, several stadium entrances were closed. Thousands of students were moved to the bleachers in the south endzone, too. Those two factors meant thousands more people were trying to get through the gates we normally use. We left our tailgate at 5:30, which in years past would've put us in our seats no later than 5:45. Instead, we didn't get there until 6:10--LONG after the Longhorn Band's entrance. For the first time in at least 10 years, I missed the stinkin' kickoff. At least we were there in time to see our first touchdown!

Once the game got started, the Horns didn't look like our Horns, that's for sure! We all kept waiting for them to turn it on and put some distance between themselves and Arkansas State. Didn't happen! When Arkie State scored late to make it an eight-point game, we had visions of Appalachian State's big upset over Michigan dancing through our heads. Fortunately for us, we recovered the ensuing onsides kick and were able to run out the clock and hang on for the win. 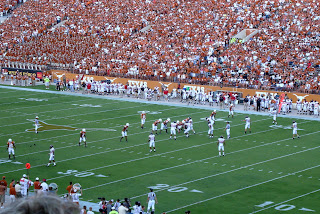 As the visiting players left the field, they passed right in front of our section. As they did, Texas fans in the lower rows starting standing and applauding their efforts. Row by row, Horn fans stood to give the Arkie State team an ovation for the outstanding game they played. I hope those players understood our applause; they truly earned our respect.

Even though I was disappointed in the parking, the entrance procedures, and our team's performance, that moment reminded me why I'm proud to be a Longhorn.

More scenes from the game: 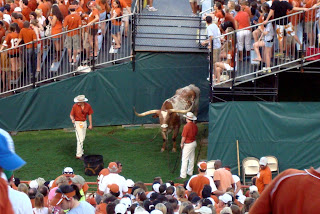 Nobody puts Bevo in a corner! (OK, so maybe UT does. With the expanded endzone bleachers in place, Bevo's territory has shrunk!) 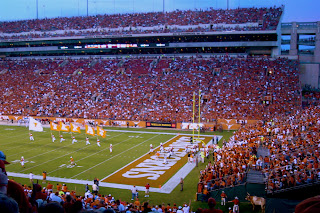 It really was a gorgeous night for football. We had pleasant breezes all day long (well, except for the eternity we spent in the sun trying to get in the stadium!), and by game time, we were in blissful shade. That's a huge improvement over last year's 100+ degree misery when people were carted off on stretchers during the third quarter! 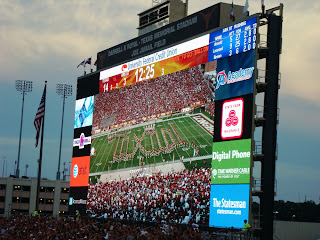 The LHB performed Script Texas, probably my favorite halftime drill. Godzillatron, our ginormous video screen, was more enjoyable this time around, by the way, thanks to smaller ads and live stats.
Posted by See-Dub at 11:40 PM