I have more questions than answers about this ridiculous debacle--the second in a row to K State. We were SUPPOSED to get revenge for last year's loss to the purple, but no, we ended up black and blue. And now, we're still scratching our heads, wondering...

Why can't our linebackers cover somebody?
Why can't anyone actually TACKLE--you know, wrap 'em up?
Why can't our offensive line protect Colt and give him just one second to make the play?
Why do we punt when we're down by 20 with 10 minutes to go?
When we do go for it on fourth down even later in the fourth quarter, why do we throw for 2 yards when we need 8?
Why do so many of our plays send a back or receiver east or west when the endzone (or at least, the first down marker) requires movement to the north or south?

Oh, the agony of defeat! What a drag.

Even though I'd like to just forget this game, here are a few photos for the record. In spite of the miserable game, someday I might want to remember:

Vince Young was there for the coin toss! He and his Texas Ex Titans teammates had a bye week, so they came "home." Of course, we all went wild for our championship hero. (Later we went wild, wishing he could suit up and come to our rescue just one more time!) 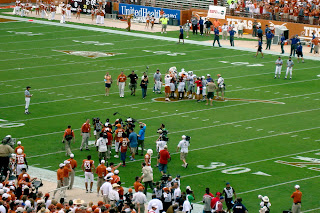 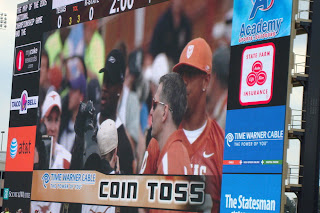 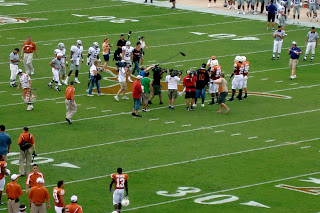 We went from hot-hot-hot to wet-n-wild! The game started with few clouds, then more and more gathered as the first half progressed. 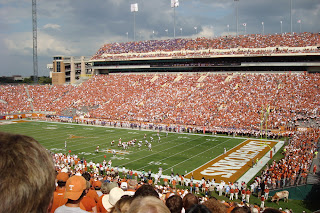 The rains came at halftime, just in time for the Alumni Band's performance. (Last year's Alumni Band appearance was messed up when lightning caused a long delay and many fair-weather fans left.) 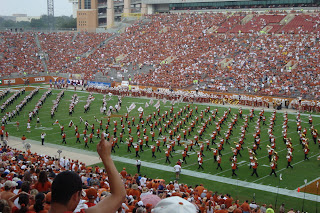 It was bizarre how quickly the rain came! Ginormous raindrops fell nearly horizontally, first from the south and seconds later, from the north. Once the rain stopped, it was like someone had turned on a sun lamp: INSTANT heat in spite of the remaining clouds.

Near the end of the game, we couldn't help but notice another storm brewing to our east. The PA announcer said that the storm could contain small hail. 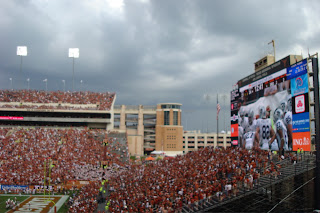 As soon as the game was (mercifully) over, he again warned that we should proceed to our cars as quickly as possible. Well, we TRIED... 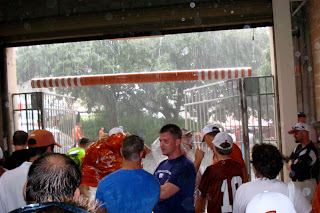 It was ridiculous! I can handle a little rain, but this was RAIN. It was coming down hard and fast, and it created rivers along every walkway. It took us a while to catch a lull, but eventually we made it back to the tailgate. 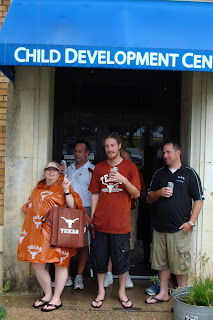 Everybody tried to find a dry spot, and these guys apparently were willing to offer themselves as lightning rods under the tree! 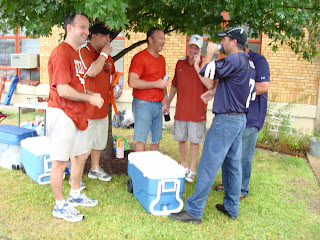 The kids in the group didn't seem to mind the downpour. Here they're making "rain angels": 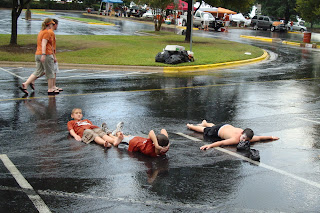 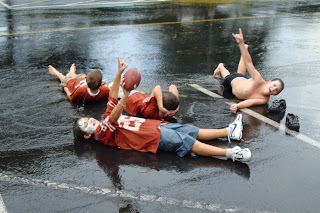 No one should ever accuse us of being fair-weather fans! Even down by 20, even with a storm approaching, we stayed for every last second until "The Eyes" had been sung.

Which may leave you wondering: