How do I love Longhorn football?

Let me count the ways! I love:

1. having College Gameday on in the background while I'm working on my Saturday morning projects.
2. putting on my lucky T-shirt and shoes hours before gametime--just to get in the mood.
3. getting to watch the game with friends who know how to set a table for a football party.
4. seeing the "What Starts Here Changes the World" promos for UT (narrated by Walter Cronkite).
5. exchanging phone calls and text messages during the game.
6. spotting friends in the stands (in center--turned to his left, scratching his head. Can you believe Brett spotted him in the few seconds he was on the screen?): 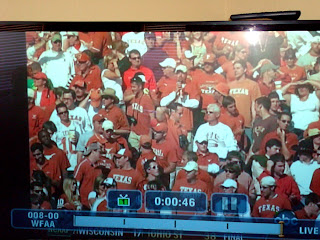 7. cheering for the Horns even when we're down by a seemingly insurmountable 21 points.
8. watching JC and Colt and Ship and Bailey pull off the impossible.
9. firing off celebratory emails after the game, just to affirm: WE NEVER DOUBTED!*

I have just one more game in Austin to attend this year, so I'm really trying to soak in these last few weeks of the season. Win or lose, these games are tons of fun. But crazy games like today's, along with so many wild upsets all season long, make the ride that much more fantastic!

*This is what our football group says after we win games that we honestly expected to lose. In fact, those three words showed up in two emails and a text message sent within minutes of each other this evening. And I readily admit it: I REALLY thought we'd lose this one! Whew!
Posted by See-Dub at 8:32 PM

No joke - at one point (when the score was 14-35) on Saturday I thought of you and hoped you were taking it well.

Then at another point on Saturday I thought of you and wondered how late you'd be keeping the neighbors up that night!

What a game! Congrats!