After the toy store, we noticed that it was almost game time! The Horns were playing their first round game against Minnesota, so we headed for a burger joint that just happened to have an outdoor patio with big screen TVs.

Our choice: Dirty's! Ron Gibson, our editorial adviser at The Daily Texan, used to say that Dirty's is where God gets His cheeseburgers. 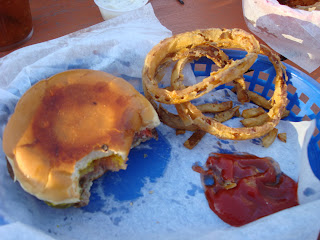 So yes, we got the burgers and fries and onion rings: heart attack on a plate, for sure! So greasy but oh, so good! Brett especially liked the chili on his chili burger. 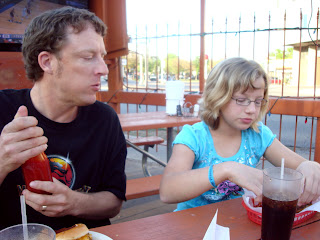 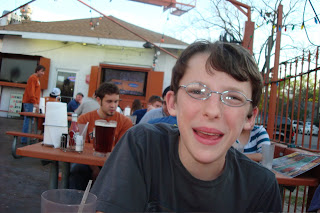 I hadn't been to Dirty's in years, and Brett and the kids had never been. 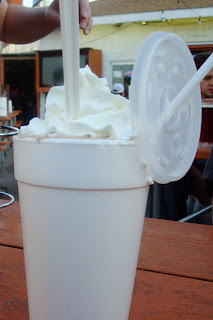 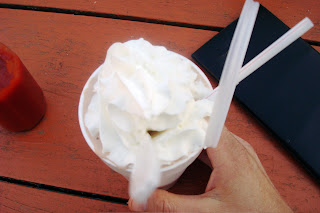 I remembered the place had awesome milkshakes, so Katie had one for dessert. (She took a picture of her shake! Like mother, like daughter...) 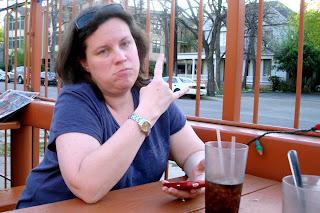 Of course, we watched the Horns' game. Pretty cool to watch the game on the Drag, just down the street from campus. Fortunately, the Horns had a license to kill gophers. 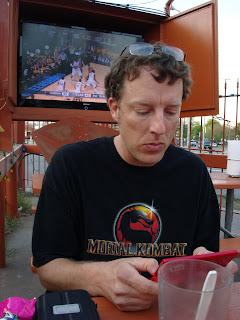 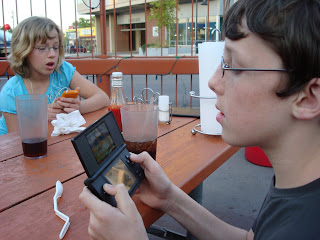 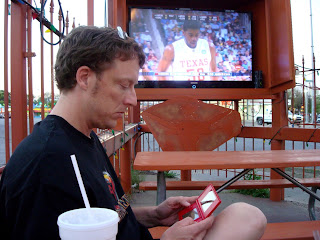 Well, I say "we" watched the game, but basically my family tolerated my sports-watching! Brett and the kids kept themselves occupied by playing DS or listening to my iPod. 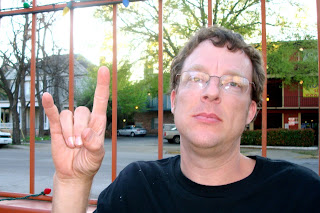 Katie took this picture. Brett thought he was saying, "Rock on!" When we told him he was doing "Hook 'em, Horns," his expression changed to this: 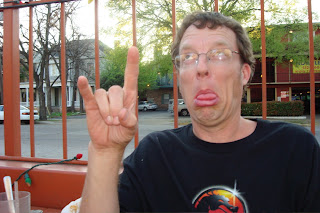 Too funny!
Another funny from our visit to Dirty's: Our waitress kept looking at me funny, starting the moment we walked out to the patio. After we'd been there for a while, she finally said, "You used to go to the Starbuck's on 15th Street, didn't you?" No, never been there. "You go to ACC?" No, never went to Austin Community College.

She was really puzzled, saying that she's usually pretty good about remembering faces. Then I told her that I don't even live in Austin anymore. "Well, I did go to school in H---, but that was 10 years ago," she said. Sure enough, she was in my junior English class way back in '97!

After Dirty's, we hit another item on Brett's list: Half Price Books. Then it was on to C's house for some R&R.
Posted by See-Dub at 10:36 PM