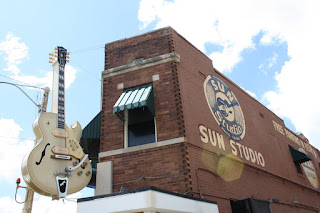 After seeing Graceland and its environs, we continued our pilgrimage by visiting Sun Studio, the place where Elvis recorded his first hits. 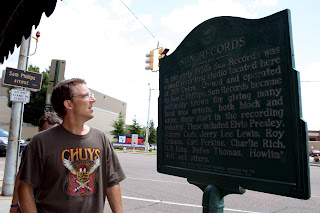 It was interesting to learn about the studio's history. 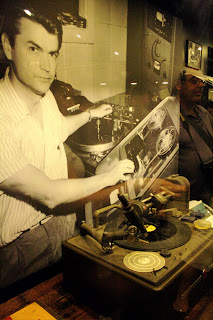 Sam Phillips started Sun, and the list of recording artists reads like a "Who's Who" of musicians from the early days of rock and roll. 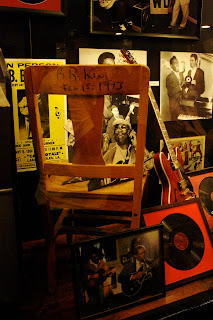 B.B. King was one of his first recording stars. 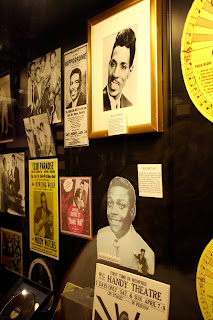 During the tour we learned about "Rocket 88" by Jackie Brenston and the Delta Cats, a song that some consider to be the first rock and roll record. On the way to recording that song, one guy's amp fell off the car and broke. There really was no way to fix it, but they stuffed newspapers in the speaker. That paper created a distorted sound that Sam overamplified. And the rest is history.

After giving us that background, our perky tour guide turned her attention to the last wall of the upstairs museum, the section devoted to Elvis. Sun has a couple of Elvis items, like his high school yearbooks and this program from a variety show (that has his name misspelled!): 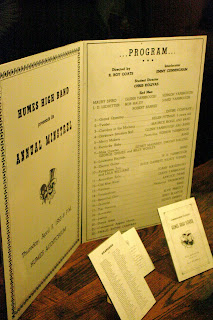 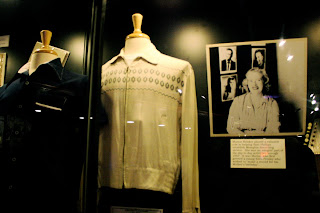 There's also a picture of Marion, the receptionist who took pity on the young man who said he needed to record a song for his mama's birthday. (Gladys' birthday had been months earlier, but...) Marion's the one who greeted him the day he first walked into the studio: 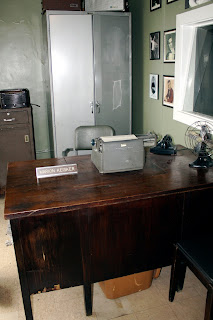 Marion set aside his recording to make sure Sam gave it a listen. It wasn't anything exciting, but when Elvis came back to the studio, some horsing around with "That's All Right, Mama" during a break REALLY got Sam's attention. It was just what he'd been looking for. It was an instant hit when played on Memphis radio.

Inside the studio itself, we learned how Johnny Cash had used a dollar bill to provide percussion when he didn't have a drummer for "I Walk the Line." We heard about the Million Dollar Quartet and saw the famous photo of Johnny Cash, Carl Perkins, Jerry Lee Lewis and Elvis Presley not far from the spot where they had sung together. We also saw the marks on the floor to see where Elvis and the other musicians stood when he made his first recordings. Then we got to try out the Sun Studio microphone: 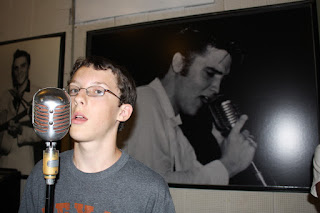 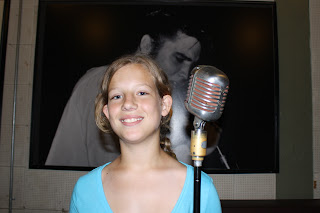 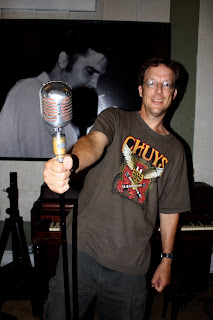 It was really interesting to stand in the room where so much great music had been made.

After that tour we made our way to the Lorraine Motel, which is now the National Civil Rights Museum. 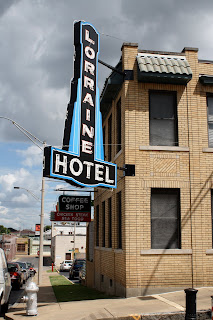 We couldn't go in the museum (it's closed on Tuesdays), but I really wanted to visit the site so we could see this infamous balcony: 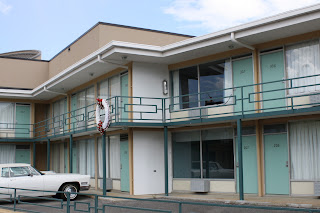 Recognize it? For years I've seen these two photos from an awful moment in American history: 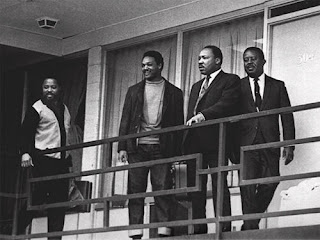 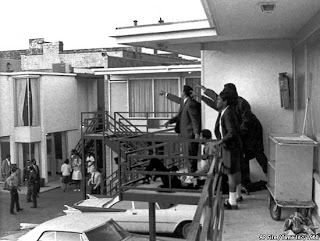 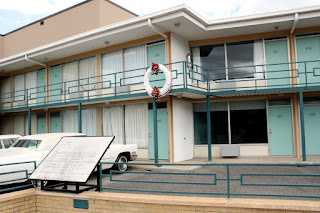 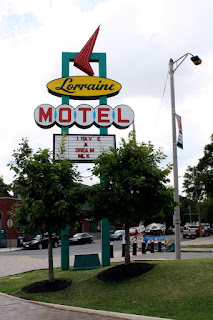 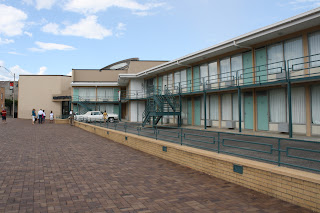 While we were there, a light rain started to fall. 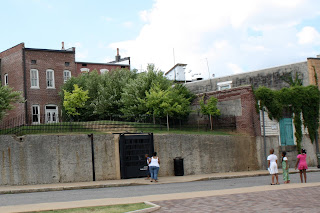 Turning around, we could see part the boarding house where James Earl Ray was staying. It was from a bathroom window there that Ray fired the fatal shot. 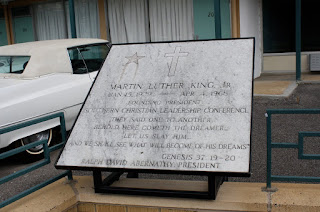 I wish we'd been able to go inside the museum, but it was important to me to see this place where our history took such a tragic turn.

After the Lorraine, we drove downtown. We had eaten some snacks in our car between Graceland attractions, so we were STARVING by the time we found the downtown alley restaurant, Rendezvous. A few weeks before our trip, I had asked my Facebook friends for advice. Where should we go for good Memphis barbecue? I got several recommendations, but more than one person mentioned Rendezvous as the place for great dry-rub ribs. 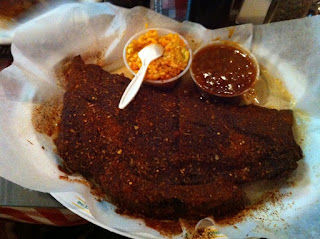 Oh, man, was it GOOD! The ribs were out of this world, and the cole slaw? PHENOMENAL! We arrived about 20 minutes before 4 when the full menu is available, so Katie and I ordered the ribs. Ryan and Brett shared our food with us until they could finally order their own brisket. The brisket was really good, but the ribs were outstanding. 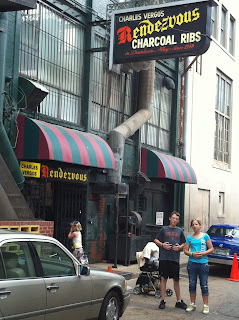 And yes, we ate A LOT. Afterwards we really needed an after-dinner walk, so we headed up the alley and out into downtown. 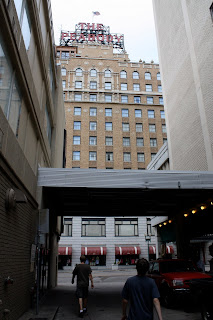 We saw the Peabody Hotel, famous for its resident ducks. 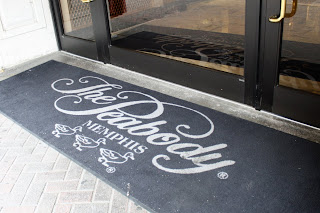 We'd been told we really needed to see the ducks parade into or out of the lobby, but we were at Graceland in the morning, and in the afternoon, we were gorging on barbecue! After our dinner, though, we noticed a swarm of people heading into the restaurant, so we got an idea of the crowds that watched those famous ducks.

We walked from downtown to the Mississippi riverfront. 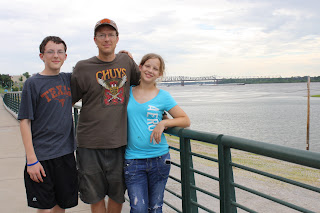 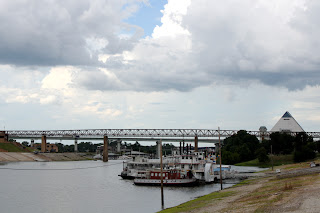 We saw the bridge to Mud Island and the pyramid. No time for those attractions this time around, though! (This view did make me think of The Firm. Remember Tom Cruise on the Mud Island monorail?)

We also made the obligatory trek to Beale Street. 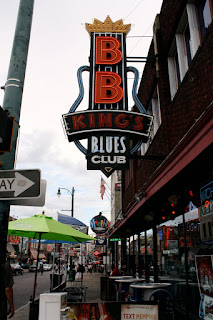 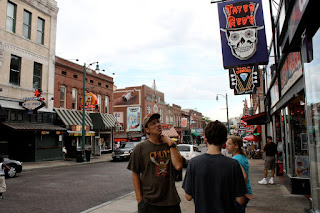 Between Graceland and Sun Studio, I had played Marc Cohn's "Walking in Memphis" for the kids, so it's no wonder that the song kept running through my head! "I was walking in Memphis, walking with my feet 10 feet off of Beale..." And wouldn't you know it, as we walked down Beale, we heard a band playing that song!

It was a full, busy day in Memphis, but we couldn't rest just yet. We ended our Tuesday by driving to Nashville, our next stop.
Posted by See-Dub at 11:27 PM