I don't know how to write this. Since we got the news yesterday, I've felt compelled to write something—anything—as a tribute to our friend Tim Head. Granted, this is an entirely selfish endeavor. Nobody needs me to add to the dozens of Facebook comments written to and about him, but I need to write down these feelings to process, to acknowledge, to grieve.

But when I try to describe Tim's place in our lives, I just can't.

For one thing, I don't want to make it sound like "the end," like he's no longer a part of us, because he will ALWAYS be with us. How could we ever forget him? Certain "Tim-isms" will forever be a part of our vocabulary, especially "Katie Girl"! This house we're so thankful to (finally) be in? Tim helped us get it. Every single time I thank God for getting us here, I also thank Him for Tim, who selflessly helped us survive our misadventures in real estate. We are so grateful for that. And I'm not nearly ready to accept that he won't be sending me texts during Texas football games, that he won't be there in the sound booth early on "his" Sundays, or that he won't be around to talk me down from the ledge the next time I get riled up about one of my causes. So how in the world can I write about him as if he's not here?

And then there's my limited vocabulary. I just don't have the words to describe Tim Head. He was so down-to-earth, so sincere, so genuine with everyone he met. As others have said, he would do anything for anybody. But that doesn't quite capture his spirit. There are plenty of compassionate people out there, and I'm blessed to have many of them in my life.

But Tim? Compassionate doesn't quite cut it. I know first-hand how hard he'd work for his friends. When we put our house on the market, he spent countless hours showing it or setting up showings. After a couple of months, we thought we had sold the house, but then our buyer had financing issues. Tim tirelessly worked with this guy when his real estate agent went MIA, making calls and trying to find a way for this "stranger" to buy a house. But Tim never met a stranger, did he? One Saturday, in the middle of all the showings and paperwork, he and another good friend spent their day off working on our yard. We're not just talking yard work; we're talking SUMMER yard work! Hot and sweaty, he kept smiling, kept cracking jokes. What a friend. 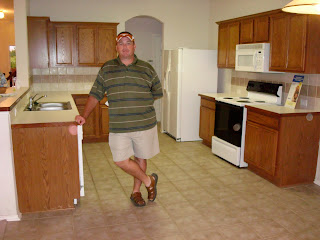 Then came the house-hunting. He gave up nights and weekends to show us house after house, trying to help us find a place that would satisfy our quirky needs. He never seemed impatient, never tried to rush us, never complained about our finicky tastes. Of course, our first contract fell through, so nine months later, we started the whole house-shopping process all over again, and he STILL gave us his time and energy without complaint. And on those house-hunting occasions, it never failed that he'd need to make a call to another friend, someone else who needed his help, too. I'll never know how one man could do so much for so many.

I'm also unable to describe Tim's effect on kids. Ryan and Katie adore him. (Now see that? I first wrote adored: past tense! They will ALWAYS adore him, but already I'm slipping into past tense. And that's just wrong.) At the hospital yesterday, a bunch of us were talking about how ALL of our kids have a special relationship with Tim. 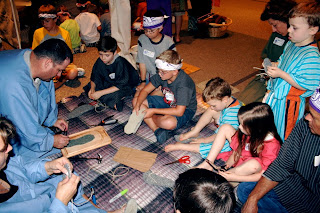 And how can I explain Tim's work at Heritage? It seems too simple to say he worked in the booth—too simple and entirely inadequate. He was our veteran A/V tech, his tenure dating back to the transparency-flipping days at Midtown, but he did so much more than get lyrics on the screen. He also served as a small group leader for our student ministry, and he helped with countless other projects (like VBS), too. Our backup song leader, Tim was renowned for choosing "old school" C of C songs when he was leading. He would get pretty anxious before the service started, but he always did a good job because he so obviously loved the Lord! And how I loved to hear him pray! He recruited people to lead Sunday prayers, but he himself had such a gift for speaking his heart. As he led us in prayer, he opened himself up to God and to us. Many, many times he'd get choked up while praying, and we were all drawn closer to God because of his raw emotion.

Since we got the call about the accident, we're the ones who have been praying through tears. We prayed for a miracle, and the miracle we got was Tim's complete healing and the best Christmas present ever—for him. But what about those of us who love him so much and miss him terribly? This world was better because of Tim; our lives were richer because he was with us. Now our prayers beg for a different type of healing, for peace and comfort, especially for his beloved Amy and Samantha.

I'll never understand why this happened, why this husband/father/friend who meant so much to so many was called home. But I know that my Redeemer lives, and because of that, I know for certain that Tim has won eternal life. I know 2 Timothy 4:7. I know where Tim is, and I know we'll see him again.

very well said! I always think of the kids swarming around Tim after church... Thanks for the post!

Well said. My memory is him choking up while praying for the kids to start back to school and talking about Samantha beginning first grade. So, so tragic. Prayers for his friends and family will continue!

Wonderful tribute. I love that he was wearing a Texas visor for the picture in your house! I know he did that on purpose.

Beautifully said! Thanks for helping us process, acknowledge and grieve.