I've been ready to upgrade my iPhone for a while now, but just when I was ready to get the 3GS, Apple had to announce the iPhone 4. I bided my time, and when the new phones were available for pre-order, I reserved that puppy. The catch? I had until the end of business on June 24 to pick up the phone or I'd lose my reservation. Ordinarily I'd be more than willing to wait until the crazy rush died down, but vacation is right around the corner, and I really wanted the new phone (better camera! video! multitasking! reorienting maps!) for our travels. Besides, June 24 just happened to be the rare summer day without any obligations until dinnertime.

So that's how I found myself in the middle of this: 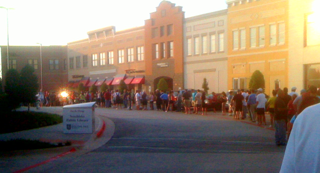 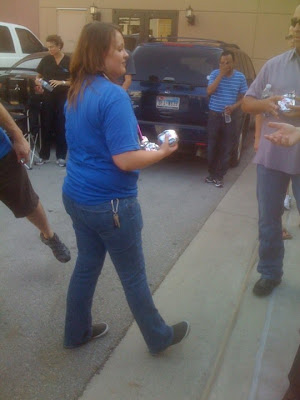 Soon after I arrived, store employees began distributing water bottles. Around 8:30 they were back, this time with chicken biscuits from Chick-fil-A. A manager made periodic visits to keep us updated. For instance, he told us that it normally took 5-7 minutes to complete the transaction, but with so many people buying phones, the wait could go up to 20 minutes. PER TRANSACTION. TIMES 1,800 PEOPLE. Around 9 a.m. the line stopped moving, but close to 9:30, the manager was back again to say that delay was caused by the West Coast's 7 a.m. opening. All of those California stores firing up their iPhones really slowed down the system. By the time the guy gave us that update, we were back to a 7-8 minute transaction time. 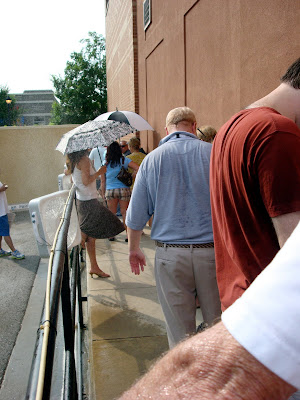 Along one nasty, unshaded stretch of the line, we had misters along the rail. Those helped, but it was still pretty warm by that time (10 a.m.). It would've been nice to have had some cloud cover, but we kept saying how glad we were that it wasn't raining. Heh. 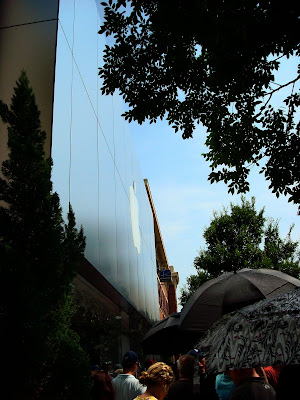 Around 11:30 we rounded the corner so we could finally see the storefront. By that point, I was on my fourth bottle of water and was wondering why I hadn't thought to find some astronaut underwear for my wait. At least we had the big umbrellas. The store provided those, too. As people entered the store, they'd pass back the relief-giving umbrellas. 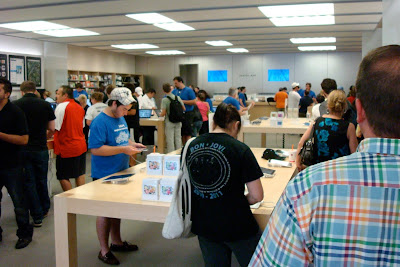 I finally got into the store a little after noon. These Apple folks certainly know how to deal with the masses. They kept us hydrated and fed, and as soon as we entered the store itself, gave us Jamba Juice. I had a hunch that right before they had to wait on us, they wanted to create a more docile, grateful crowd—instead of the angry, bitter, drowning-in-our-own-sweat mob that had been waiting in the Texas heat for 5 1/2 hours.

(By the way, soon after I took this photo, my line buddy directed my attention to the street just outside. It was POURING RAIN.)

To make a rambling story even more ramblingy, by the time we entered the air-conditioned store, time FLEW. Even though it still took about another half-hour of waiting inside, I had my A/C, my Jamba Juice, and more than a couple of gadgets in the store to play with.

By the way, not everyone waiting had pre-ordered a phone. There was a line similar to ours snaking its way around the opposite side of the building. One of those walk-in customers was allowed to enter the store for every five or six of us with reservations. That means their wait was at least five times longer than ours! One couple we saw inside had been waiting for 24 hours to get their phones without pre-ordering them. I was really thankful to be in the much faster moving reserved line.

After 5 1/2 hours in line, a 10-minute purchase/activation transaction and a quick trip to the restroom, I emerged from the store with this: 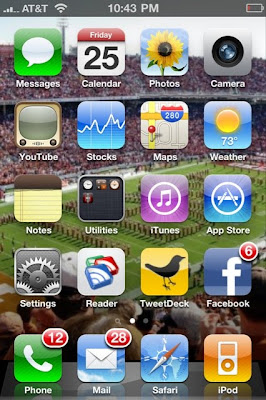 It IS a thing of beauty! (The actual phone, not just my home screen. Too sleepy to actually take a photo of the new phone itself.)

Would I have waited if not for vacation? No. Am I glad I have my phone now? ABSOLUTELY.

Some folks have reported reception issues (hasn't bitten me yet), but I LOVE this phone! The screen is ridiculously clear, and the few photos I've taken with it are far superior to the ones my old 3G could take (like the first two images in this post).

So far this summer, I have done two things I swore I was too old to do: go to a midnight movie premiere (WORTH IT!) and wait in a ridiculous line for some gadget. Even though there are easier ways to have bought the new phone, I'm thankful for the many people I got to visit with and observe—and for the Jamba Juice.
Posted by See-Dub at 10:49 PM