Parting is such sweet sorrow.

Father's Day pix are on their way tomorrow, but first: 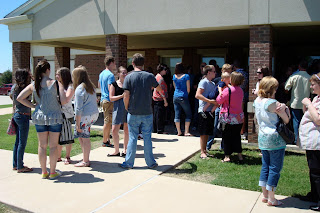 After church today we joined the throngs gathered outside the Café to say goodbye to our Camper of the Week. 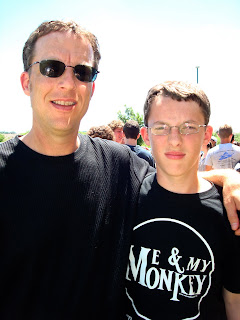 Next Sunday Katie will be the one on her way to church camp, but this week it's Ryan's turn. He's in great company; we have a bunch of our high schoolers making the trip. 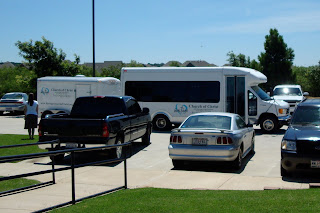 Within minutes of the group's departure, I wondered why I thought it was such a good idea for him to go. Of course, we know he's learning and growing closer to his Father while also building relationships with his brothers and sisters.

But we miss our boy!

Plus, while he's gone, I must switch into DIY mode. I absolutely HAVE to attack his bedroom's Noah's Ark wallpaper border that I've been promising to remove since we moved in. Yes, in September. (I KNOW!) There's much to be done before he returns on Friday.

Of course, that doesn't keep me from hoping the time flies until our fearless foursome is reunited!
Posted by See-Dub at 10:41 PM