What a great day for sports!

I'm no soccer fan, but today's game winner was off-the-charts exciting—for a sport that's not Texas football, anyway. Plenty of things about the World Cup have annoyed me to no end (ties, bad officiating, those awful vuvuzelas, the ridiculous number of "injuries" that seem more like flops), but that U.S. goal was a thing of beauty. I yelled. A lot. Then I got on Twitter to see this: 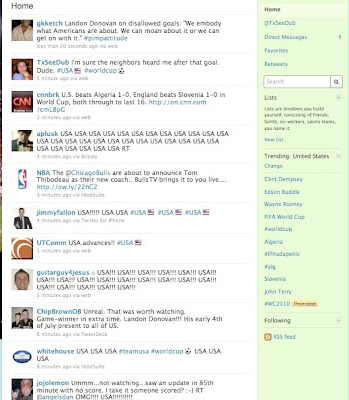 USA! USA! USA! Everybody was all aTwitter about the big win—except the NBA.

Then there was TCU's come-from-behind win to stay alive in the College World Series. When I checked the score at church, TCU was trailing 7-2. By the time I got home and turned on the TV, the Frogs had closed the gap to 7-4. Then came the two-out, grand slam homerun. A two-run HR followed. Frogs win, 11-7. So exciting! It still makes me sick that my Horns aren't in the CWS, but I truly hope TCU can win it all—even if the Frogs are the reason UT's season ended in Austin.

Sidenote: I can barely type the word FROGS. I keep typing FRONGS. Anyway...

I didn't watch a single serve or volley of it, but today's marathon match at Wimbledon is a great story, too. Ten hours? 59-59 tie? Crazy!

Who would've thought I'd get so wrapped up in sports here in the off-season doldrums, still 72 days away from kickoff!
Posted by See-Dub at 11:00 PM