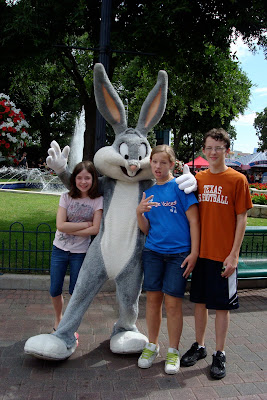 Once again we took a friend along with us for a day in our favorite park. After Alex visited Six Flags for the first time two years ago, she knew she wanted to return, so today was finally the day. 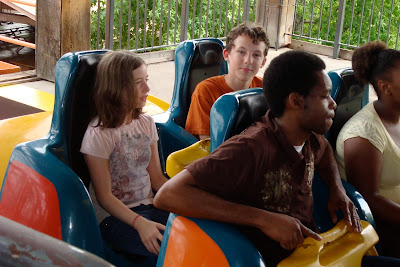 We were constantly admonished to "have a Six Flags day," and thanks to relatively small crowds and frequent stops at the misters (not THAT kind of mister, Mister!), we were able to do that! We rode just about everything we wanted to without too much waiting. 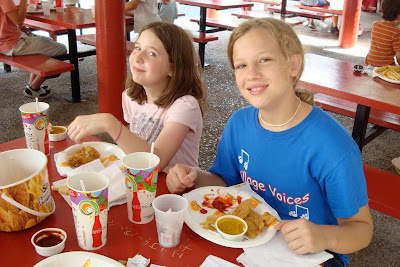 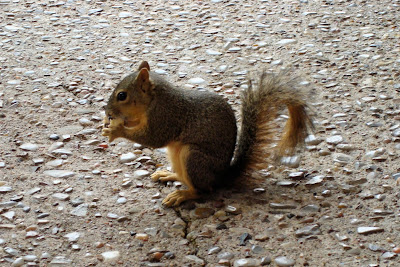 This little guy provided dinner theatre for us at lunch. I'm sure all those french fries he finds on the ground can't be good for his figure, but he sure was cute. Later on, Ryan's imitation of the squirrel was our suppertime entertainment! 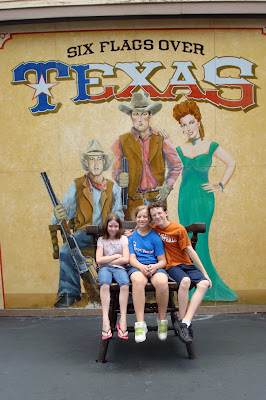 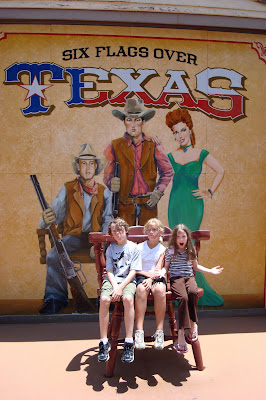 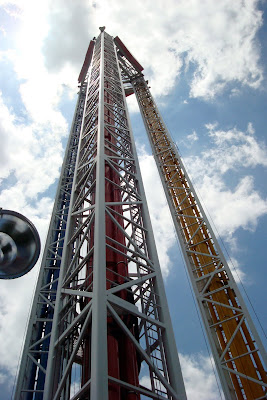 Ryan and I rode the Superman while Katie and Alex headed to the Mine Train. Our hosts at the Superman were trainees from Turkey--interesting! 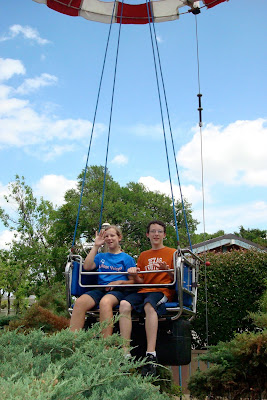 We rode the chute-out a couple of times. 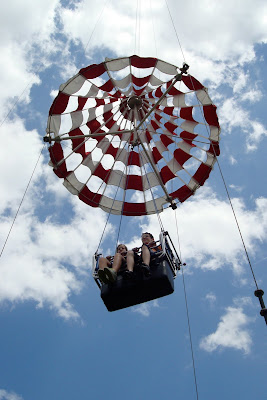 Later in the afternoon we noticed that this very chute was stuck midway up! How scary would that be! 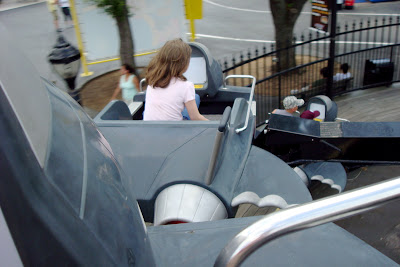 Alex on the Batwing 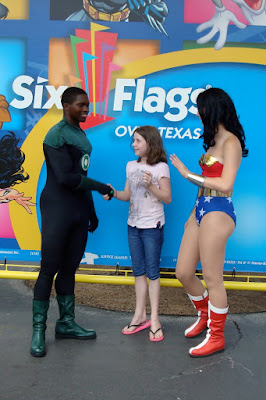 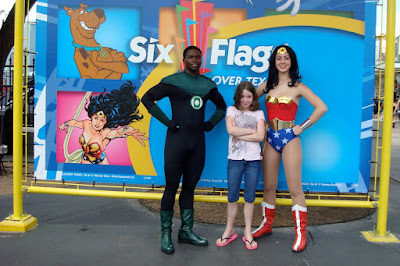 I was impressed with how personable these two costumed characters were. They didn't just pose with Alex and Katie; they both engaged in conversation with the girls. I appreciated that personal attention. 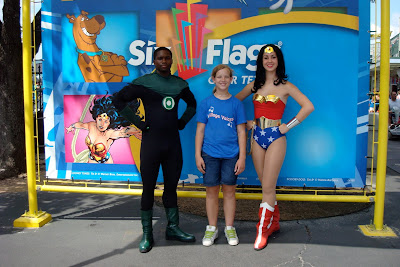 We rode Tony Hawk's Big Spin. I love that ride and all the skateboarding trivia that lines the queue, but the errors on the signs are still there: 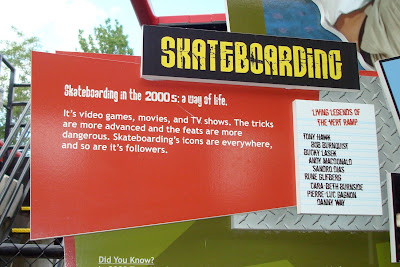 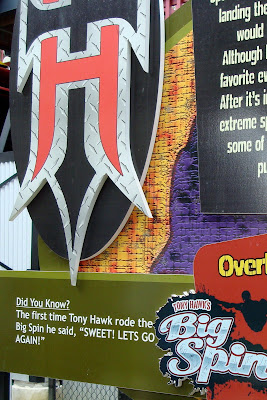 We also cooled off with the log ride, Roaring Rapids and the Aquaman, including the bridge: 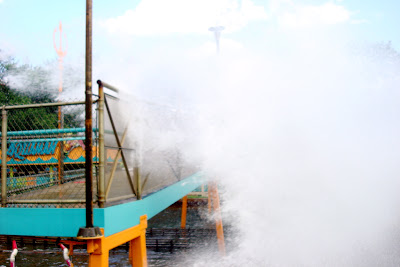 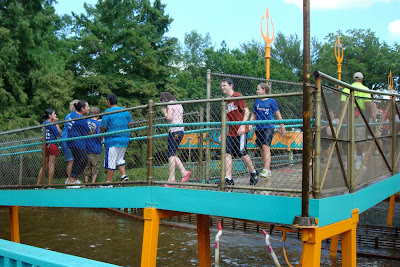 Well, Ryan and the girls stayed on the bridge for the big soaking. 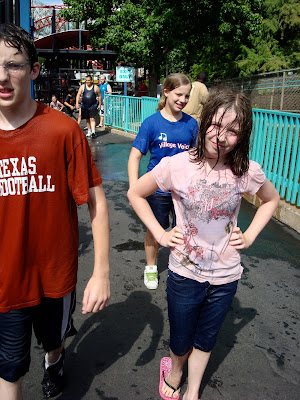 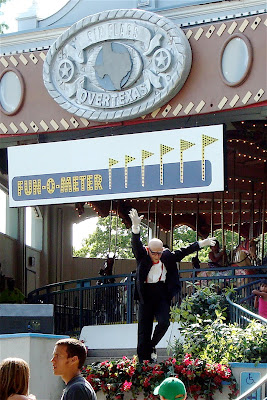 Some are creeped out by the dancing dude, but I like him! 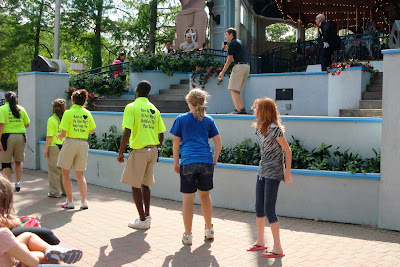 Katie (and sometimes Alex) joined in, showing off her moves. 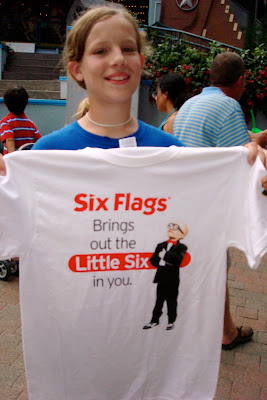 And Katie's dancing skills were noticed! She was one of two dancers to win Six Flags T-shirts!

Even though we had hoped to stay later, my dogs were barking (stupid shoes are NOT Six Flags-worthy!). We rode the train to Boomtown, checking out progress on the Giant's reconstruction. 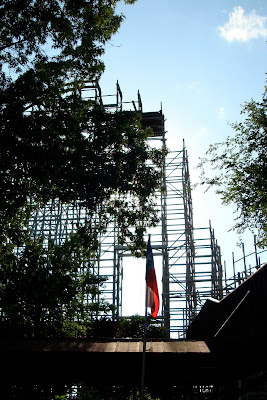 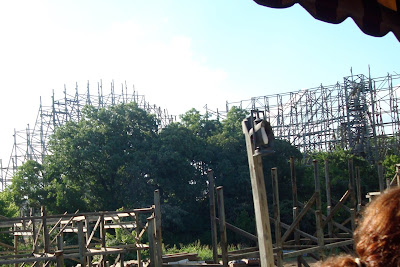 Then it was one more spin on the Mine Train and we were out of there.

Oh, how we love Six Flags, hot, smelly, overpriced SFOT! Now that we've finally spent a weekday at the place, it really feels like summer.
Posted by See-Dub at 10:20 PM

I share those mistakes with my boys every time. Look at it as a learning oppurtunity ;)