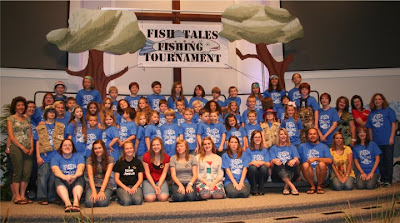 one more to go!

This year's children's musical is our family's swan song. Katie is graduating into youth and out of the children's ministry music camp. It doesn't seem like it was all that long ago that she was too young to participate and played in a spare classroom while Ryan learned his "Go, Go, Jonah" lines. Now, eight years later, we have just one last show to go.

Maybe it's the fatigue talking, but WAAAAAH!

Katie and the rest of the cast did a great job tonight, by the way. She nailed her solo, as I knew she would. How crazy is it that even after eight of these musicals, I still get nervous when my kid's solo is coming up?

Katie was fabulous! Tony even commented what a GREAT singer she is! I have really been blessed by the show. Thanks so much for all your hard work and you are absolutely welcome for the photo!