It was during my fifth period English class that I got the CNN "breaking news" email about the Fort Hood shooting. With about five minutes left in the period, my students had finished their assignment for the day so I turned on the classroom TV to see local news coverage of the tragedy. Once class was dismissed, I checked the Austin American-Statesman's website and Twitter and discovered that the Statesman had established an account especially for Fort Hood updates.

From that point on, Twitter became my "go-to" information source. Twitter! And I thought I signed up for Twitter to get fluff from celebrities, to read funny blurbs from comedians, to get snarky comments during football games. And here I was relying on Twitter for hard news tweets?

Now that the news cycle is progressing, the @FtHoodShootings tweets are less about breaking news "quick hits" and more about links to longer stories and photo galleries. I'm still checking plenty of other news outlets, but those Twitter alerts are awfully helpful, letting me know when new content is available on the Statesman site.

But here's the cool thing: Twitter's not just disseminating info after this tragedy. It's also providing some, too. CNN.com had a photo of Kim Munley, the police officer who took down the shooter, on its homepage for most of the day. The source for that photo? 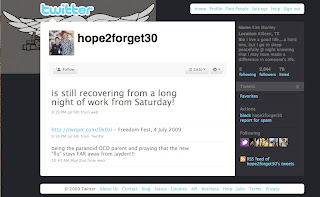