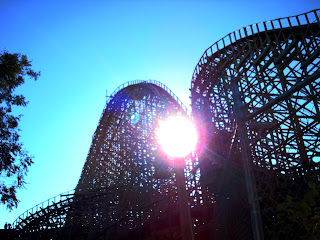 The sun has set on the Texas Giant as we know it. We slipped off to Six Flags this afternoon for a few hours (even though I still needed to grade research papers—shhhh!) to take part in the last day of Fright Fest AND to ride the Giant one last time before it closes. 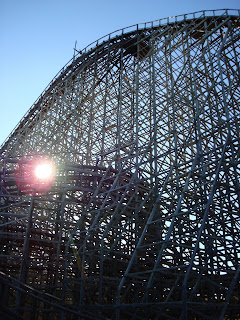 The massive coaster will be renovated and won't reopen until 2011. We can only hope the new Giant will be a smoother ride than the concussion-maker that is the Giant! That bone-rattler was a wild ride! Still, the kids and I felt obligated to ride it one more time before it closes for two years.

While we were in the park, Brett couldn't resist posing with his fellow superheroes: 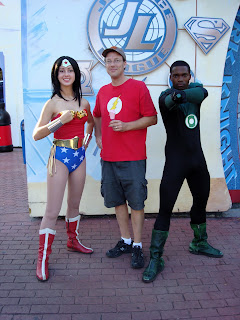 Brett took the kids to a haunted house while I rode a couple of rides. We also made a point to get to some of the special Fright Fest features such as the Elvira "Superstitions" ride (in the Spongebob/Fly Me to the Moon/Right Stuff space) and the "Arania's Nightmare" show at the Southern Palace: 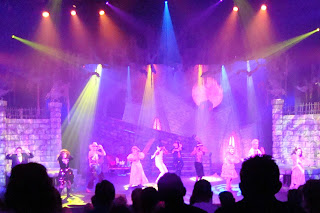 Katie even got to dance with one of the actors for a little bit! Cool!

Later we rode the Titan one last time and got to see the fireworks that were part of the Giant's closing celebration. Then we wandered over to see all the hoopla. 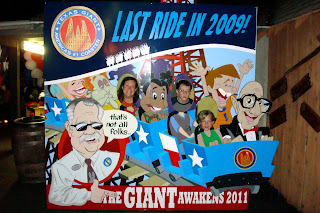 We weren't on the very last ride, but we can say we rode the Giant on its last day of operation in 2009! 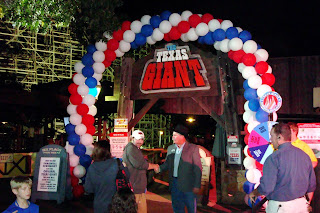 We almost didn't make it to Fright Fest this year, and because of work and church obligations, I almost didn't go with Brett and the kids today. I'm so glad it worked out that all four of us could go this afternoon anyway! It was a nice break from grading, the weather was beautiful, and we coaster crazies wouldn't have wanted to miss this: 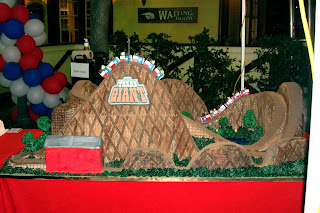