The heart of worship. 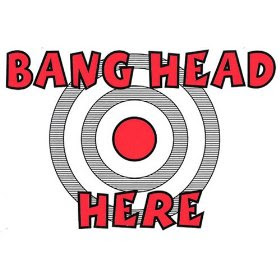 It's been a good 36 hours since Sunday's 9 a.m. service, but I'm still feeling the aftershocks from yesterday's technology meltdown. I know NOBODY CARES about this geeky stuff but me and maybe three other people, but I am writing it down because oh-my-goodness, I still can't believe all this stuff happened on one day. My little "Bang Head Here" sign in the sound booth got a real workout, for sure! Now it wouldn't have surprised me if this had occurred on Easter or Christmas, but what's the deal with Nov. 1? I never knew All Saints Day was such a special occasion!

It starts with the laptop that won't start, the laptop that holds almost everything for Sunday's service: MediaShout script, sermon slides AND announcement slides, files that represent a decent amount of work!

While I'm trying to get the laptop to start up, we find out that the internet's down in the building. Hmmm. Strange.

Meanwhile, we boot up the old desktop PC for backup and start building the song program from scratch. Ordinarily I email a backup script to the booth—just in case. But this weekend I was distracted by research papers and Halloween and, yes, football. Since we didn't have email, it wouldn't have mattered anyway, but still...

So we get the old computer up and running, plug in the day's songs, and load the pre-sermon video. In spite of my lack of script backup, I do have the sermon slides on a USB key, but for some reason, the desktop PC is not reading that drive. Grrr...

Oops! It's after 9! Time to start! We run through the warm-up song (using the old desktop PC) without a hitch. Because the internet and email are down, we're not able to show a baby picture. The USB key still won't show up either, so we're still missing sermon slides. But look who decided to join us! The laptop has started up!

So presto-change-o, during the (alleged) 60-second meet-and-greet we switch connections to hook the laptop to the switcher so it can be seen on the big screens and rear projector, we transfer the pre-sermon video to that computer, and we locate the audio cable so we can hear said video. I hit the menu to switch the laptop to "dual screens" and see that "dual screens" is not an option. Ruh-roh. I start messing with the display properties, and we put in a call to KB, our resident computer guru. By the time we get him on the phone, the laptop has frozen and we're rebooting.

Meanwhile, we're back to the old PC so we can proceed with the service. We're two lyric screens into the first song when dun-dun-DUN!!! MediaShout decides it really doesn't feel like advancing to the next page of lyrics. Riiiiight. Not that that's a huge surprise. The slow advancing was pretty much why we'd been using the laptop instead of the desktop computer anyway. But still. "Strength will rise as we wait upon the Lord" was on the screen for WAY too long, and we're all stuck waiting on the computer!

So we blank out the screens and wait for the laptop to restart. Before too long, it's back up, and this time, it's ready to play along. We're able to switch to dual screen mode, and we're able to add the pre-sermon video. There's no time to test the video's sound (FORESHADOWING!!!), but we at least have a working computer. We switch our cables yet again, turn on the screens, and we're back in business.

When it was time to play the video, all three of us in the booth kind of held our breaths. We figured it would work (We're trained professionals! Unpaid, but we're pros!), but we hated that we didn't get to test the audio first. So wouldn't you know it, the video plays, but there's NO SOUND. Double GRRR!

For those keeping score at home, that makes four unrelated technology breakdowns in one service. FOUR! Four pretty random occurrences that just happened. And not one of them could be blamed on the ol' "user error." It's the nature of technology; every now and then, it doesn't work like it's supposed to. It's just crazy that four different things all chose this particular Sunday to freak out!

But here's the kicker: Even if we'd had 400 things fall apart, none of that could have kept us from worshiping our God! I love that John is always quick to remind everyone that anytime we have some sort of technical difficulty. So what if a video doesn't play? What does it matter if we have to do without lyrics for a little while? Granted, our goal is to facilitate and enhance the worship experience and to minimize distractions, but when things go wrong, SO WHAT? We don't need any of that to praise God, to lift our voices, to turn our hearts and minds to Him! As long as we have our hearts in the right place, NOTHING else matters!

Once the laptop was happy, the video had audio again, and the internet was back up (and the baby picture was found), I left the booth and settled into my seat for the 10:30 service. And as I watched the lyrics and sermon notes and the video appear on those big screens, I was so relieved to see everything running so smoothly.

It was then that I had to just close my eyes so I could truly worship, so I could stop thinking about the medium and focus on the message. I wanted to peel back the layers and get to the heart of worship. It made me think of the Michael W. Smith song:

When the music fades
All is stripped away...

Take away the computers and spotlights, the speakers and screens. Take out the stage and cushy chairs, the microphones and controlled climate. What's left? Just a bunch of believers. We're all there, worshiping our Lord.

My prayer is that if you took everything, even our voices, away, our hearts would still be focused on our Creator, our God.
Posted by See-Dub at 9:21 PM

Email ThisBlogThis!Share to TwitterShare to FacebookShare to Pinterest
Labels: Heritage, life in the booth, NaBloPoMo

Thanks for all you do working in and out of the A/V booth to minister at Heritage! You do such a great job - it's a common remark around the office that if something happened to all of the ministers, Heritage could go on pretty smoothly, but if anything happens to Bonnie or Charis, we're in big trouble...and we mean that very seriously!