This football trip turned out a little differently than we'd expected. First, Ryan was supposed to accompany me because I had an extra ticket. When we got yet another ticket, Katie was included, too. Then Ryan came down with strep. The doctor had said he could make the trip, but he just wasn't up to traveling by Friday afternoon. What a bummer! I was so glad Katie could go to Austin with me, but we really missed Ryan!

Another difference: Since this was an 11 a.m. kickoff, we drove down on Friday night instead of our usual Saturday. Saturday morning we headed on over to the tailgate spot and then promptly made our way to the north side of the stadium to greet the team as they arrived. It had been a while since I'd done this, and Katie had never seen the coaches and players get off the buses. 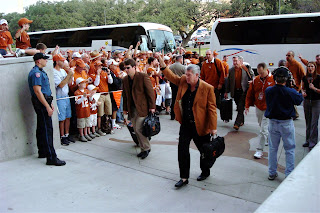 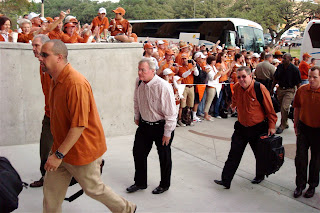 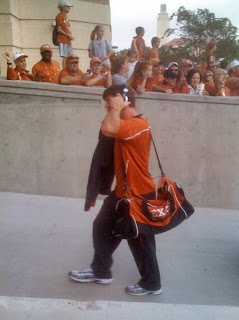 Jordan Shipley (on his way to a record-setting game) 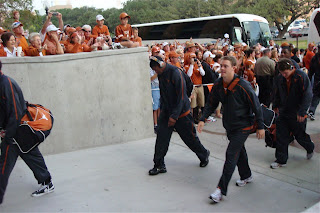 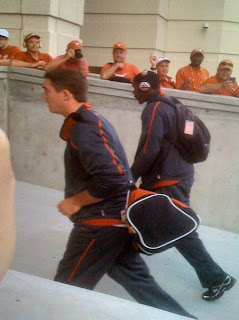 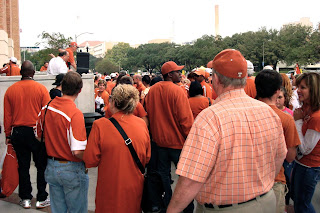 After the team was inside the stadium, all the players' families gathered for a prayer. It was an honor to join them in prayer for the Fort Hood victims and for their kids. It was nice to hear them give God thanks for all of their blessings and ask Him for His protection. 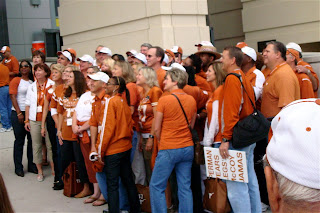 After the prayer, the parents lined up for a group photo.

From there Katie and I went back to our tailgate. Before the game our guys lined up for a group photo of their own. 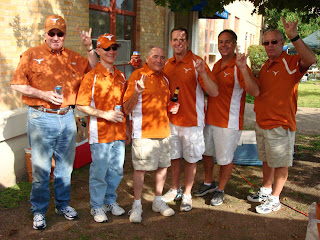 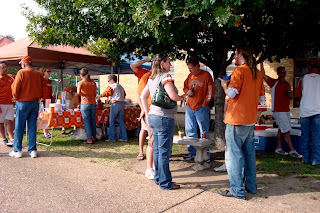 Since the game was so early, we didn't have a real meal before the game, just breakfast treats. We were definitely saving our appetites for later! 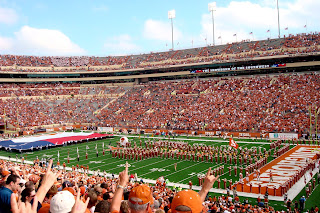 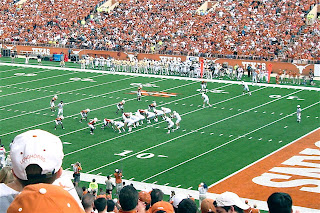 It took us a while to get rolling, but this game was never really in doubt. 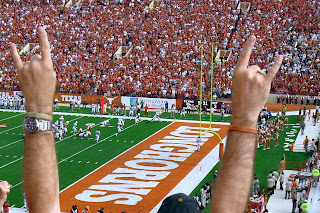 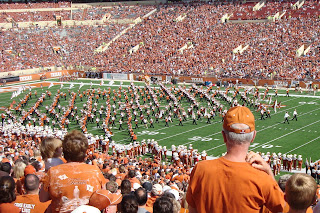 This was Alumni Band Day! I love seeing the former Longhorn Band members on the field together. 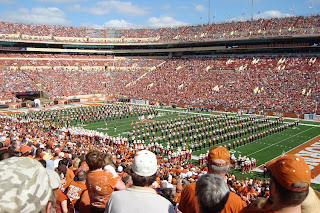 While the ginormous band countermarches and creates formations, "Baton Guy" is in the north endzone chunking his baton hundreds of feet in the air. (OK, so maybe it's not hundreds of feet. But still.) He was too far away for me to get a picture of him this year. 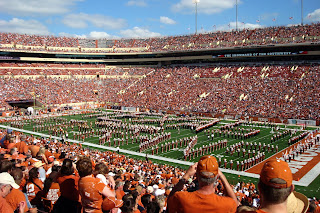 The current LHB joined the Alumni Band to spell "TEXAS VETERANS" as a Veterans Day tribute. 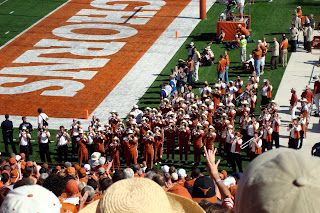 After halftime, the alumni and current trombone players combined to serenade Section 1 with their traditional William Tell Overture. Loved it! 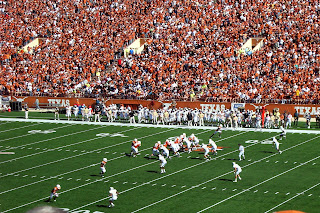 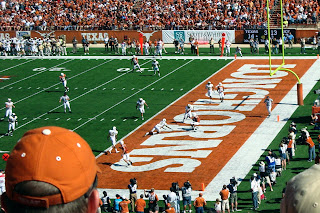 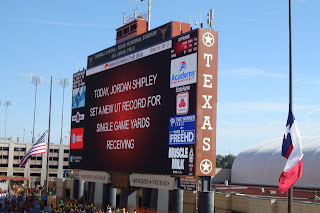 Way to go, Ship! His 89-yarder was a thing of beauty. Colt hit him in stride, and off he went, straight to the endzone. 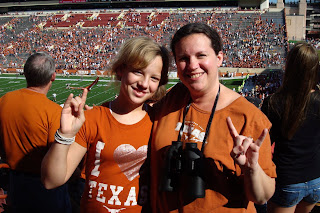 We had a great time, but how I wish Ryan could've been with us! 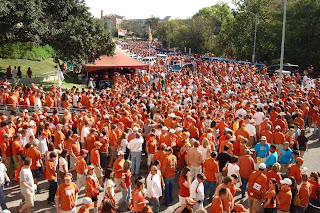 Even after a blowout (when bunches left before the game ended), this is what we face to get from DKR to our tailgate spot. You would think with the smaller crowd for this game, it wouldn't have been so bad. We had an intimate gathering of 101,003 this week! 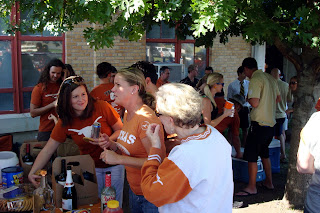 In spite of the blowout, we had plenty stick around to tailgate after the game. 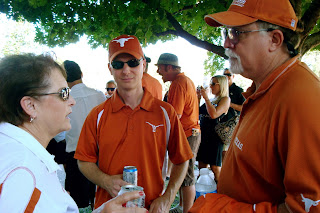 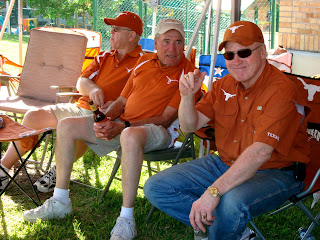 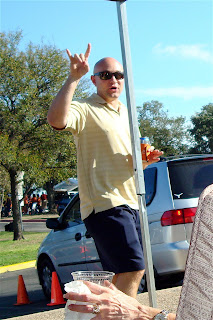 We also had a good number of Central Florida fans stop by. They were quite appreciative of the Texas hospitality, and most of them had this to say: "Beat the Gators!" Let us beat four other teams first, and we'll be happy to!

For dinner this week we had ribeyes. Dan ("Rice Boy") had said we should honor the Golden Knights by dining on Sir Loin, so steaks were put on the menu. Good call! 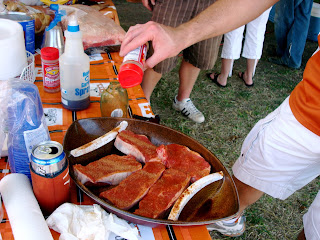 They were seasoned perfectly, 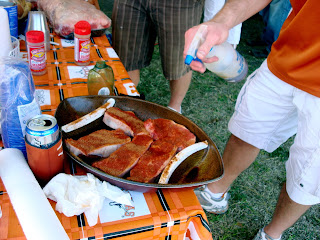 and then doused in vermouth. This process was repeated before and even while the steaks were grilling. 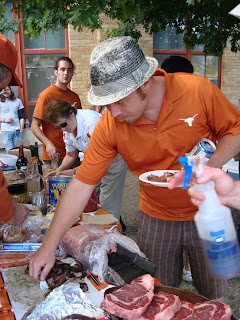 The result? The best steak EVER!

What WASN'T the best ever was this weekend. First Ryan missed out because of sickness, and then Katie started feeling puny! By the time we got home, she was feeling pretty yucky. Sunday morning she felt better, but then Sunday afternoon, she started feeling bad again. Uh-oh. Ryan's already on the upswing; we're praying Katie makes a quick recovery, too. We'd hate for them to miss school, and in any case, they need to be healthy next weekend because on Saturday, the three of us are off to Waco for Game 10!
Posted by See-Dub at 8:37 PM