What we didn't know. 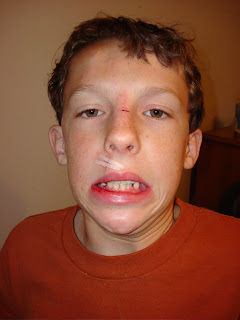 We knew we were heading to our small group meeting tonight. We didn't know we'd be going from there to the ER at Cook.

At 7:30 I picked up Ryan from his youth activity at the church building and headed back to our regular small group's meeting spot down the street. The kids played hide-and-seek while we watched the Cowboys in all their high-def glory. Then Katie interrupted.

We knew we should head downstairs immediately. We didn't know just how much blood I'd find in that bathroom sink once I got there.

It took a while to get the full account, but in their intense game, Ryan had jumped from a fence to a stone wall. He tripped off the wall and fell onto the ground below—a drop of about 4 feet.

By the time he and six kids made it back inside the house, it was obvious he needed medical attention. He had a cut above his lip and a scratch across his nose, his lip was cut and bloody, and a tooth was way loose. Add to that the fact that today was not a "factor day," and we knew we'd be checking with the hematologist on call. (He infuses clotting factor every other day, so his last dose had been yesterday morning. His factor level decreases over the 48 hours between infusions, so it was pretty low when he fell.) And his glasses? Toast!

We knew we're beyond blessed to live so close to Cook Children's. We didn't know that an ER trip could go so well.

The hematologist (who's not Ryan's regular specialist) felt we should get a CT just to be on the safe side. He had informed the ER that we were on our way, so Ryan was in the waiting room for less than 2 minutes. Of course, Ryan was a trooper as his vitals were taken and as people kept asking what had happened. He was so brave as they started his IV even though his face HURT, especially that loose tooth. And when it was time for the CT scan, he handled it calmly and with maturity (even as Mom and Dad stood there stylin' in our neon '80s splattered radiation shields).

The news was all good: CT looked normal, the nose cut was really just a scratch, and the cut above his lip could be closed with glue instead of stitches. That tooth was still a bother, and since Ryan was pumped full of factor, the ER doctor suggested we go ahead and pull it—which he did. Every step of the way, we were impressed with the staff's professionalism, courtesy and efficiency. Unbelievable.

We knew Ryan's a cool kid. We didn't know he could be so funny under pressure.

Ryan was obviously uncomfortable, but he handled the situation as well as anybody could've. As we walked to the treatment area, he noticed how much the scene resembled the set of Scrubs. A few times he had gauze in his mouth, so he communicated by "writing" on the bedsheet. He maintained composure as the doctor pulled his tooth, quickly reminding us that the tooth fairy pays $2 these days.

A couple of times Brett lightened the mood with silly comments, but Ryan had the line of the night. When Brett was singing his favorite movie song (in a ridiculous voice, of course), Ryan said, "Please! I'm in enough pain already!"

We knew we have awesome friends. We didn't know how blazingly fast they could be to respond to our needs.

Our friends the Ws quickly volunteered to keep Katie there at their house so Brett and I could both take Ryan to Cook. When we returned to pick Katie up, she was cozy as could be in borrowed PJs! It meant the world to us that we could both go with Ryan to the hospital and know Katie was in excellent hands.

I'd never really used Facebook as a prayer hotline, but that's what it became! Within seconds of posting a status update as we drove to the hospital, we heard from folks who were praying at that very minute. Awesome.

We thank God for protecting Ryan and for sending us the people who helped us get through this crazy night!

So here's Ryan after we got home: 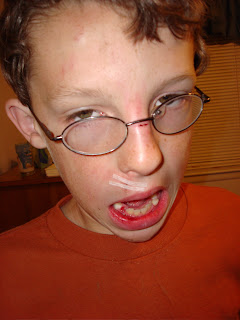 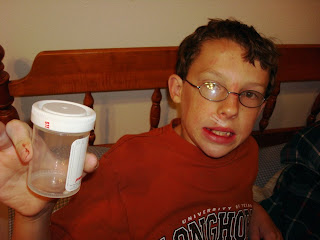 So glad that he is okay! He is looking soooo pretty! Was it a baby tooth?

Yep. I woke up this morning to see $2 underneath my pillow.
Ryan
P.s. Hey mom, just to let you know I'm typeing [or typing] this comment on the WII. This internet thing is really cool.

Yes, yes, so glad Rayn is okay!
I remember a couple of years ago when Vince had a broken arm, Noah had been hit in the eye with a baseball and Megan had flipped on a dirtbike and severly bruised her shin. My wonderful pediatrician, Dr. Jones, looked at me and said, "Well, you've reached the stage when your kids will be in here less for being sick and more for trauma!" Okay - I'm sorry but that was not comforting! True - but not comforting!!!! The joys of active children!