After months of prayer and planning, our expanded children's wing is open! 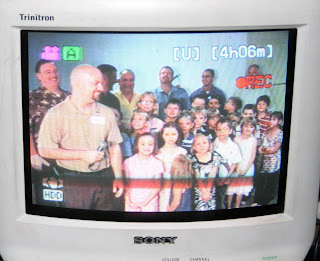 The ribbon-cutting was today, and Katie got to help! I was able to see her on the booth monitor as we were waiting to go live. 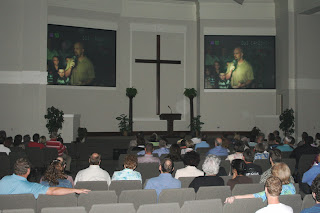 Then we were able to let folks in the Family Center watch the proceedings down the hall "via satellite"! Both services saw kids run through the ceremonial ribbons to symbolize the expansion's opening. 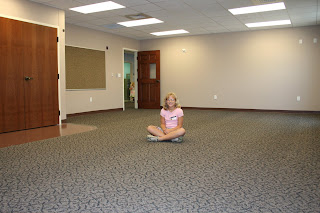 After service, people had the chance to tour the rooms, including this one, the new PowerZone home (for fifth and sixth graders). Can you tell that Katie's ready for class? It won't be long before these new rooms will be outfitted with furniture and filled with kids.

Thank You, God, for this expansion, and thank You for all the children who will come to know You in this place!
Posted by See-Dub at 11:36 PM

Email ThisBlogThis!Share to TwitterShare to FacebookShare to Pinterest
Labels: Heritage, Katie, life in the booth