With our summer dwindling down to the last few days, I decided it was now or never for our Big D adventure. Brett was heading to Oklahoma for a video game convention, so I woke the kids early to say goodbye to him—and to get ready for our own adventure!

It wasn't until we were on our way that I told them we were headed to the TRE station to board a train for Dallas! 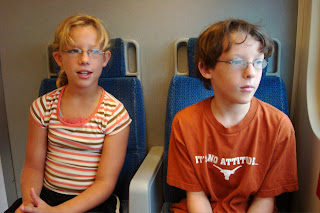 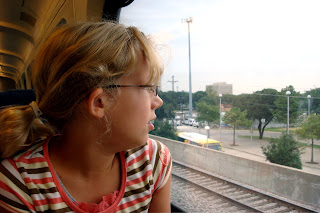 It was fun to take this familiar trip via this unfamiliar route! I loved not having to drive, too! 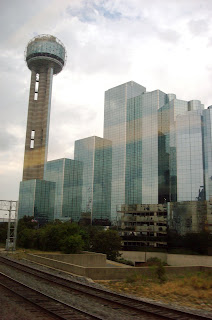 As we pulled into Union Station downtown, we got a close-up view of the Hyatt Regency and Reunion Tower. 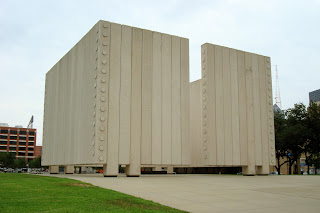 Then we walked over to the JFK memorial. 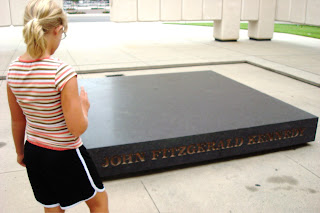 (Katie's counting the number of letters to estimate how much the engraving would've cost the Bradys as in episode 92, Amateur Nite.) 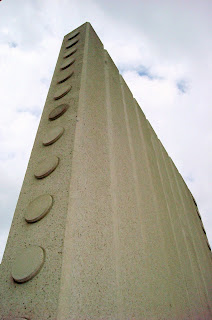 These walls have always reminded me of Legos. 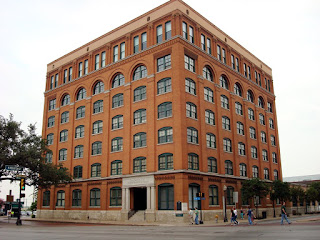 Next we headed to our first stop: 411 Elm Street. 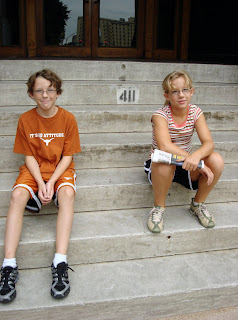 We were on our way to the Sixth Floor Museum, but we were a bit early. To pass time, I got the kids to sit on these steps. I remember them from Don Henley's "End of the Innocence" video, and when I visited Dallas in '90 with my girlfriends, we took our pictures here, too. 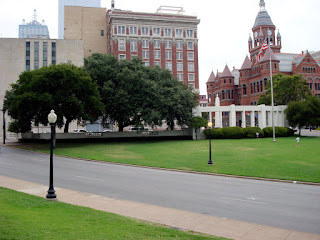 I've been here plenty of times, but it's still surreal to walk around Dealey Plaza, to set foot on this place depicted in those grainy old home movies, to see the X on the spot where history was made. 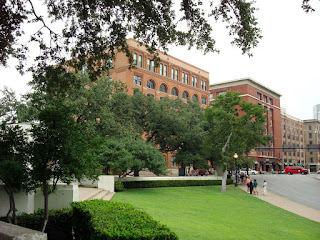 As we walked across the grassy knoll, Ryan kept reiterating how strange it was to be in this very place. 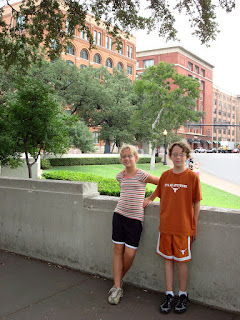 As has been true almost every time I've been here, there were people milling around, buying the assassination "newspapers," pointing to the window and then pointing to the "puff of smoke" fence behind the grassy knoll. 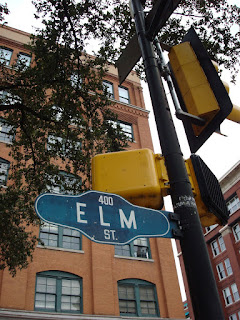 Everybody wants to see this famous building, and since 1989, the Sixth Floor Museum has let those visitors come inside. I've been wanting to check this out for years, and I'm glad we finally got to see it. It was spooky to see the reconstructed sniper's nest at that famous corner window, and the displays and videos were well done. Ryan zoomed right through the audio tour and wound up at the end of the pathway long before I was ready to move on, but both kids picked up most of the pertinent facts about Kennedy's presidency, his assassination and his legacy.

I was curious how much play the conspiracy theories would get, and I was surprised to see the amount of space devoted to those ideas. Years ago my friends and I walked through some assassination museum in West End, and the theories—plausible and wacked-out crazy—were presented there in far more detail. I appreciated that the museum didn't try too hard to stick to the "lone gunman" theory but didn't go nuts with all the possibilities.

The journalism geek in me was also drawn to the media section of the museum. One of my J profs at UT was in the press bus in that motorcade that day, and his stories fascinated me. I've also read a couple of books from reporters' perspectives, and it's so interesting to hear how they reported this horrific event with unprecedented coverage. 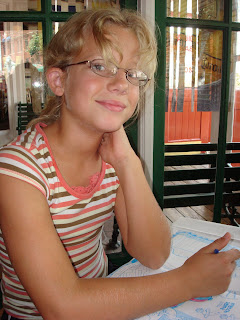 For lunch we walked over to Cadillac in West End, where I quizzed the kids to see what they had learned about President Kennedy's life, death and legacy. 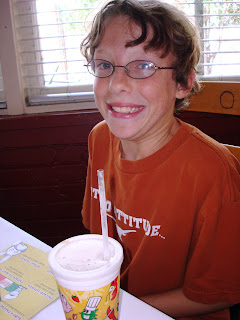 The service wasn't great (a huge party right behind us took up all our waitress's time, apparently), but the food was really good. Katie even took up my challenge and ordered SOMETHING BESIDES CHICKEN STRIPS! YEA FOR QUESADILLAS!!! 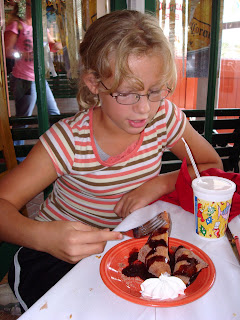 The kids got sopapillas with their kids' meals, so that was a plus, too.

After lunch we walked to the next part of our Big D day and another leg of our adventures in mass transit: the DART Rail Red Line!
Posted by See-Dub at 11:31 PM