What a fun game! 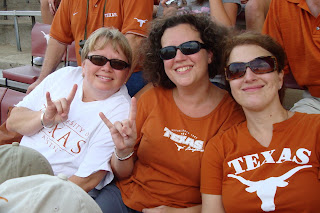 Making this home opener extra fun was Anne, one of my friends who's lucky enough to actually live in Austin. It was such a nice surprise to have an extra ticket so she could join us! 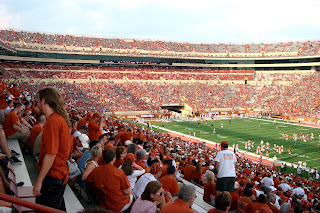 And how mind-blowing to see the new north endzone in person! 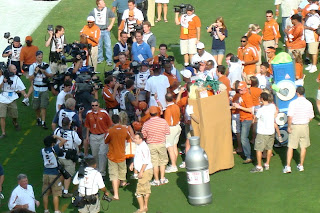 Adding to the excitement was the presence of this guy (greeted here by the H-E-B mascots). 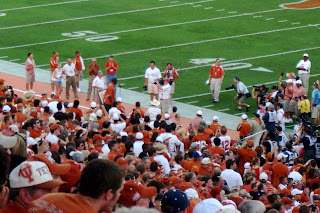 That guy at the mike? Why, that would be the best-ever college quarterback: Vince Young! 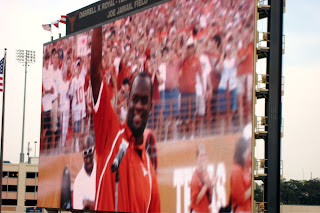 His number was retired at Saturday's game, and it was so much fun for us fans to get to show him some love—again. 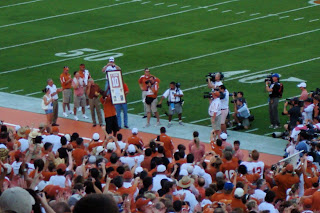 The guy is largely responsible for one of the greatest days in my life and in the lives of many of the 98,000 in attendance Saturday. Wow. 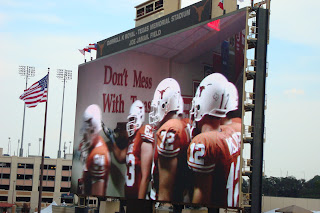 It was also fun to see all the gameday additions, like the Longhorn Band intro video and then this peek at the players BEFORE they came out on the field. 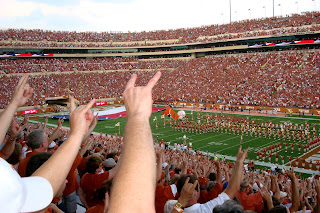 Of course, the old traditions are still fun. Having nearly 98,000 people sing "The Eyes of Texas" is always goosebump-inducing. 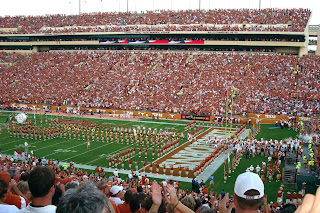 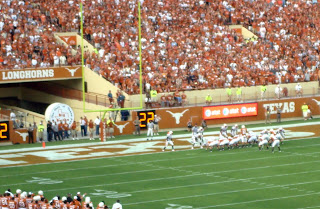 Even though our D gave up 10 points, our offense was running on all cylinders, never making us sweat this game out. (OK, so we were sweating, but only because of the weather. And even the weather wasn't awful since our seats were in the shade by kickoff.) 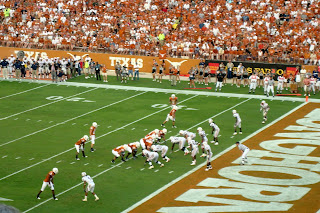 Colt McCoy was a MONSTER! Maybe Vince's presence on the sideline inspired Colt's VY-like rushing performance (103 yards). His passing game was top-notch, too, since he was 24 of 29 for 222 yards without an interception.

Yet another addition to our gameday experience: FIRE! 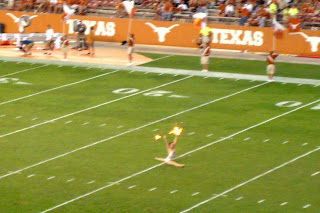 Not only did the LHB's feature twirler juggle three fire batons, but we also had fireworks and flames during the national anthem and again at game's end. 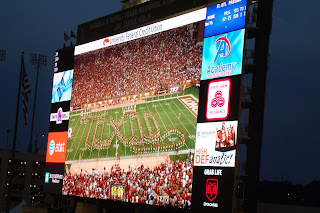 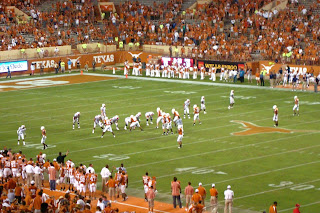 When going through my pictures, I realized how few I take of our defense. And this one I took just because I thought my niece's boyfriend's sister's husband's brother was on the field! (Is he there, Cara? I saw him on the Godzillatron right before I took this picture!) 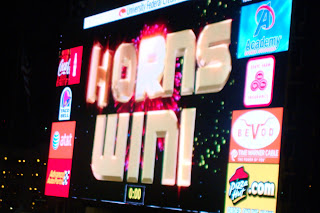 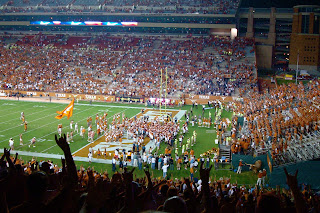 The band is now in the south endzone, right in front of us. That means that at the end of the game, the team headed our direction to sing "The Eyes" instead of to the west stands where the band sat for years. 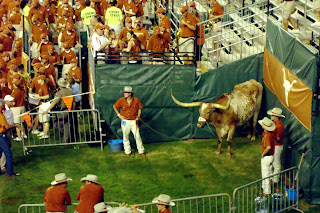 And yep, Bevo is still right in front of us, too. 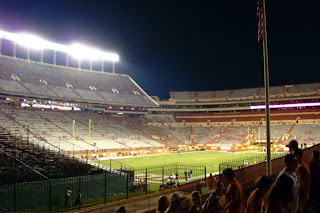 Whew! What a way to end a long but glorious
first day of the '08 season! Just like my old bumper sticker said:
"Happiness is an orange Tower!"
Posted by See-Dub at 11:55 PM

I can't tell if I see a 52 in that picture! :) But I love it! I showed Jeff your blog so he will now be an avid reader. Check out www.themichners.com to see some cook pics of the game that my boyfriend's sister's husband took. ;)

I love how much you love your Horns!
Your pics are great and I love your new header too!
My Vince is a big fan, too! Maybe one day he'll be in that LHB.
Happy Fall!