Ready to get to Austin for the season's first football weekend, I was planning to leave school ASAP to get to Dede's house in Mansfield, load up and hit the road. I was shutting down computers and locking up closets when the call came Friday afternoon.

I thought my friend T was taunting me because he was already in Austin, but no, he was stuck at DFW because his flight from Dallas to Austin had been cancelled. He had left Amarillo early that afternoon to get a head start on the tailgate shopping and to enjoy a nice dinner before the craziness of gameday began. Instead, the second leg of his trip was cancelled and he ended up having to hitch a ride with a couple of crazy women!

So instead of driving to Mansfield, I made a slight detour by way of the airport to pick up T. Then we began the long, slow drive south in holiday rush-hour traffic to meet Dede in Mansfield.

It's not quite what Dede and I had in mind when we planned to leave town on Friday. We usually don't even attempt the two-nighter since we both like to get in some good Friday family time before heading to Austin for a football Saturday. Since T's in charge of the tailgate, he couldn't wait until mid-morning Saturday to get to Austin, so it really worked out well that we had already planned to spend Friday night there for this particular weekend.

The trip took a little longer, but it was great to spend some time with T. Once we got out of Mansfield, the traffic on 35 was steady but not awful, and we were able to hold off eating dinner until we got to Austin and our favorite restaurant: 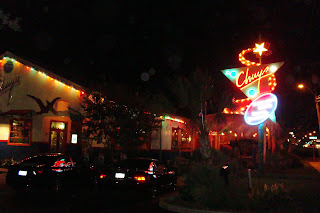 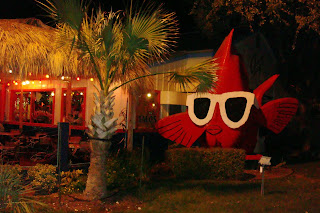 The night's close call came when our waitress tried to tell us that Chuy's no longer serves stuffed sopapillas. ARE YOU KIDDING ME? Chuy's without stuffed sopapillas, those tasty fluffs covered in sauce? My anticipation turned to bitter disappointment as I scanned the menu (which I usually don't even bother to open since I know what I want). And then the waitress returned: "False alarm!" 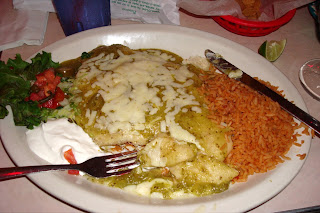 It may not be much to look at, but for years my very favorite meal has been the bean and cheese stuffed sopapilla with tomatillo sauce. Here's hoping the one I savored Friday won't be my last!
Posted by See-Dub at 11:45 PM