One of the great things about our current house is that we're close to a lot of fun places, including the bowling alley. The kids get "free game" cards every summer, so Brett takes them by several times a week to bowl. A while back, Brett even bought himself some bowling shoes so he can join them on the cheap. It's a pretty cool summer tradition that I hope we can continue even if we're farther away from the alley next year! 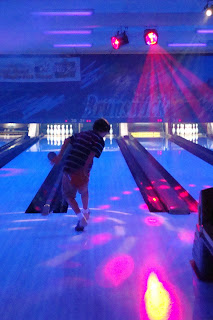 For weeks the kids have wanted to go during "cosmic bowling" time, so after church, Ryan got a friend to join us and we bowled in the dark! 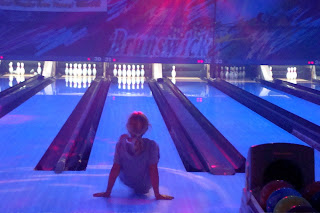 It had been ages since I'd bowled at all, and even longer since I'd seen the whole black light and disco ball extravaganza. It was great! 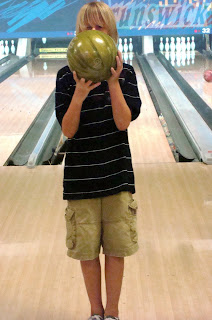 Ryan's friend J showed us a few moves, like this one where he does two complete turns before bowling a strike! 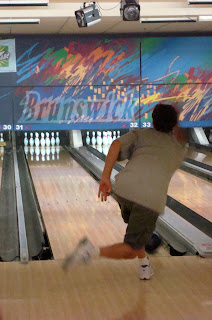 And there was no question which one of us actually took bowling in high school (and won a trophy!).

This was at the end of one game when Brett had just bowled his second strike in a row. I love his nonchalant stroll back to his seat! I was practically turning cartwheels if I could manage a spare!
Posted by See-Dub at 11:07 PM